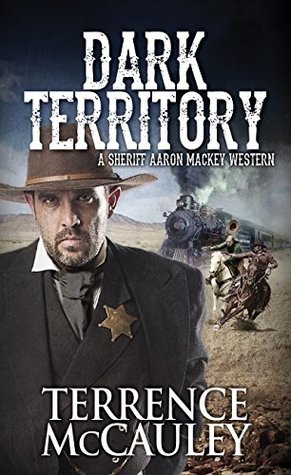 Dover Station, Montana is a boom town. Railroads tracks have been laid and the train will be going through town, so anyone already with property is bound to make a profit. A growing city brings a lot of different kinds of people, including those looking to take advantage of others, and a sheriff in a boom town like Dover Station is bound to stay busy. And Sheriff Aaron Mackey definitely being kept busy.

There has been a rash of train robberies on select trains headed in to Dover Station and Mackey figures out how the robbers know which trains to rob and lays a trap for them. But Mackey and his deputies are surprised at what they find when they end up killing all but one of the train robbers and it turns out that they are some otherwise upstanding men from the community. When the lone survivor talks, Mackey learns some surprising things about the robberies and how they are funded – the robbers make more in payments from an unknown source than they do from the train robberies themselves.

But there’s other trouble brewing – the wealthiest man in town, the one who is seeing to it that buildings are being built and the train is coming through, is making a run for mayor for the newly incorporated town, and he’s also looking for a local police force so that there’s no need for Sheriff Mackey. But Mackey takes it in stride – there are issues at stake much larger than whether or not a sheriff is needed – and he’s got a few surprises up his sleeve.

This is the second book in the Sheriff Aaron Mackey series, but I don’t feel as though I missed out on too much by not having read the first.  Most of what we need to know we get through the narrative, and the rest we can infer.

The story moves along swiftly and my biggest complaint is that it maybe moves along too quickly for me.  It’s a western, and the direct approach, with lots of action, is the style here and we don’t get to spend any time really getting to know any of the characters (other than their useful to further the action) and there’s no real subplot or misdirection: it’s plot, plot, plot … find out how train robberies are done, stop them, face off against the future mayor. Done.

Still, I did enjoy this book. Though it moved along quicker than I was expecting, I found that I was engaged in the story and in Aaron Mackey and I see that there’s a larger story being covered over the course of multiple books, which will be fun to keep reading. But this is a complete book – the next book is hinted at, but not required to enjoy what here.

Looking for a good book? Dark Territory by Terrence McCauley is a fast-paced western – a great vacation read for fans of the genre.