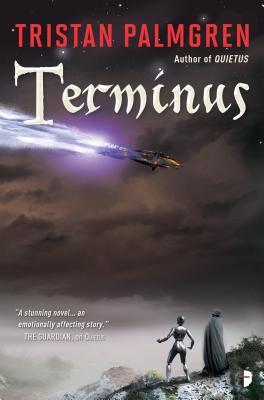 I don’t do this too often, but I’m going to use the publisher’s descriptions as posted on Goodreads, to sum up this book:

Operatives from an alien culture struggle to survive in medieval Italy, in the SF sequel to the astonishing Quietus.

The transdimensional empire, the Unity, has dissolved, its ruling powers forced into exile – but empires don’t die easily. The living planarship Ways and Means has come to medieval Earth and ended the Black Death, but it keeps its intentions to itself. Someone is trying to kill its agent Osia, who is suffering through her own exile. Spy-turned-anthropologist Meloku becomes a target, too, when she catches Ways and Means concealing the extent of its meddling. While they fight to survive, Fiametta – an Italian soldier, mercenary, and heretical preacher – raises an army and a religious revolt, aiming to split Europe in half.

I think this is a very good, very succinct description of this book.  If it sounds intriguing to you, then by all means (ways and means) you should pick it up and give it a read.  If this sounds confusing, then you and I are on the same page.

Well … okay … confusing isn’t exactly the right word.  This does make sense.  I’ve read enough scifi and fantasy and alternatve history to be able to follow the idea of an alien race, complicit in some underhand dealing that we don’t understand, coming to earth during our medieval period, and curing the black plague for reasons of their own. This is the bigger, over-arching story. But the book really follows the more immediate pursuits of the characters of Osia and Meloku and Fiametta.

And I didn’t care. I was bored numb with this read.

I really liked the first part of the first book, but once the story took on the larger scope of another empire trying not to dissolve and using earth’s middle ages as a backdrop, something shut off for me. The characters mean nothing to me (I only liked the one who didn’t make it to this book) and they are just pawns in a story that hasn’t caught my interest.  And there’s a lot of that story.

The book has a great rating on Goodreads (since I copied the description, I couldn’t help but notice) and I’m clearly going against the general reactions.  Though being out for a year and a half, I’m also surprised at how few ratings and reviews this has. Not every book is for every reader.  This one is definitely not for me.

Looking for a good book? Terminus, by Tristan Palmgren, is a follow-up to his epic Quietus. The story never captures this reader’s interest, which made for a very long, slow read.