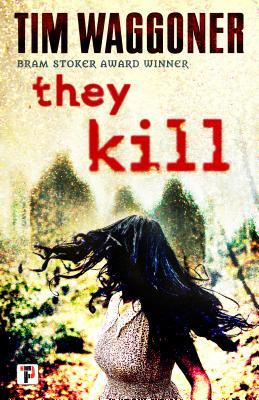 It is the one-year anniversary of the accident in which Jeffrey, Sierra Sowell’s brother, was killed and now a mysterious man known as Corliss, has resurrected Jeffrey. But Corliss doesn’t stop there. He transforms a few other people in town who have connections to Sierra – cursing them with an emphasis on their own vices.   Jeffrey, Sierra discovers, is not quite alive.  He’s a walking corpse with a Midas-like corpse touch, sending those he touches to immediate death.

Corliss offers Sierra a bargain – he will return Jeffrey to being fully alive, but she must do something for him.  How far is she willing to go for family?

I liked this book.

Be forewarned … it is extremely graphic.  There is violence that makes Pulp Fiction look like an animated DreamWorks film, and the sex would make Mae West blush. Then vomit.

My previous experience with Tim Waggoner were with his Shadow Watch books.  Those books had a very ‘bizarro-world’ feel to them (which I love) and there was some of that same sense here. The character of Mandy and her succubus, sex-crazed actions are some of the most bizarre fiction I’ve ever read.

But here’s the thing about Tim Waggoner’s bizarreness … as wild as it seems on the page, it is tightly controlled – the antics don’t get away from the author – and there is a purpose.  This isn’t just a case of being strange for the sake of being strange. Even these odd behaviors and occurrences conform to a set of rules.

Despite the gore and despite the sex, Waggoner’s biggest success is how he builds anxiety and fear. Not too long ago I read another book (which shall remain nameless [and I have not posted a review, so don’t bother searching for it]) that was page after page of gore and splatter. And it was boring.  Waggoner is never boring.

When I have taught theatre/drama to college students, I talk about the development of a dramatic story.  And Waggoner successfully follows this pattern.  We start off with a status quo and then something happens to create conflict.  There is rising action as our characters must overcome obstacle until there is a resolution and a denouement.  It’s quite beautiful to see this in fiction, done so well.

Looking for a good book? If you think you can handle the heavy stuff … the violence, the sex, the strangeness of it all … then I highly recommend you give They Kill by Tim Waggoner a read.  It is very well-written horror.

I received a free copy of this book from the publisher, through the publicist, in exchange for an honest review.