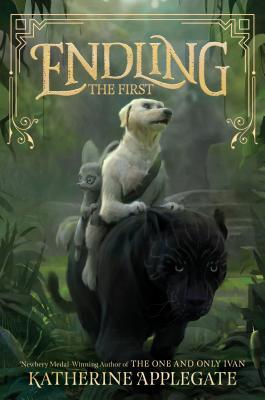 I missed the first volume in this new series by Katharine Applegate and I feel as though I missed quite a bit.

Byx is a Dairne, which is a species of animal.  She is on a mission to find more Dairne, because as far she she knows, she is the last of her kind. She is searching along with some friends she has made (Tobble, Khara, Gambler, and Renzo).  But along the way the group learns that a war is brewing a human and a felivet (humans and felivets are two of the six governing species – the other four are dairnes, nattites, raptidons, and terramants). Such a war could have devastating effects on all the other species and Byx and her friends find themselves at the center of a rebellion intent on stopping the war.

I don’t have a lot of experience with this sort of tween epic fantasy in which the leading characters are animals.  The only book of this sort that I’ve read is some of the Redwall series by Brian Jacques, and that’s exactly what I kept picturing as I read this. In part I think this was because I was really having some trouble understanding who these characters were – what race they were – and their relationship to the world at large.  Were they unusual in this world, or mostly the norm for the world around them?

I generally liked the story and Applegate has proven herself a very skilled writer. This on-going, epic fantasy series is definitely one to watch for, but it does seem as though you’ll need to start from the beginning to catch what’s going on and who all the characters are.

Looking for a good book? Fans of YA epic fantasy, and little Disney-esque critters that play all the roles will enjoy Katherine Applegate’s Endling #2: The First.