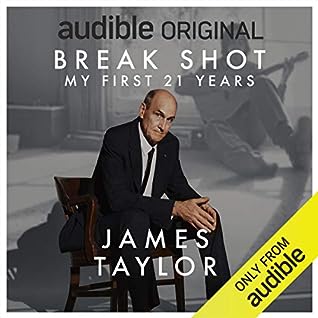 Having been a fan of James Taylor’s music for many, many years, I knew a small but fair bit about him. I was delighted to see this autobiography available from Audible so that I could learn more, and to hear it from him directly.

Taylor’s narrative jumps back and forth in time and you really need to pay attention. He will occasionally talk about his wife … meaning his current wife – while then talking about some the things that happened to him in the past.

Taylor had a lot of ups and downs throughout his life, including an unhealthy family. Taylor admits that they grew up privileged (and you really get a sense of that through some of the things the family does), but like any family, they had their share of troubles. He says at the very beginning that of he and his four siblings, three of them “ended up in psychiatric hospitals and a fourth should have. Drug and alcohol addiction tore us up.”

Through the narration we hear names of familiar artists – Carly Simon, Danny Kortchmar, Paul McCartney, John Lennon, Peter Asher, Joni Mitchell – some of them he got to know well before they became famous, some of them already well established.

Hearing about his escapade with the shiester producer who had Taylor and his band (The Flying Machine) record an album but then did nothing with it until Taylor began to make a name for himself and then released the album, with no profits going to the band.

I knew that James Taylor was one of the first artists signed to the Beatles’ new label, Apple Records, but hearing his telling of the meeting was really interesting.  And I had to laugh when he mentioned that he had to call his father and beg him to sign the contract because, as Taylor puts it, the British were a bit more concerned about things like contracts than the Americans were at that time, and James was still a minor at the time.

And that’s what really struck home.  As we listen to the 90 minute autobiography and all the things that this man did, good and bad, the people he met, and the work that he’d begun, we are then reminded at the end, that this is just James Taylor’s first twenty-one years.

I enjoyed this and, especially given its length, I can see me listening to it again.

Looking for a good book? James Taylor’s autobiographical audiobook, Break Shot: My First 21 Years is an aural delight. A biography, with music by the author, and told by the author, is not something you get a chance to listen to very often.