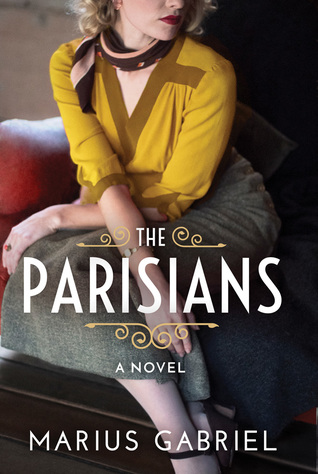 The Parisians by Marius Gabriel is one of those books that really took me by surprise.

Taking advantage of the Kindle Unlimited program, I often look for books that I am not sure if I would enjoy or not, but for one reason or another catch my eye. With the Kindle Unlimited program I feel I can try a book and if I’m not enjoying it I can easily stop because I haven’t made a commitment to read it. I have recently discovered that many of the books available through this program also give me access to the audio version of the book. That was the case with The Parisians and I listened to it primarily on my work commute.

Olivia Olsen is an American art student, living in Paris in the 1940’s. Although talented, she hasn’t been able to sell enough of her paintings to make a consistent living, even though one young man commissions work from her that he can hardly afford.  Meeting up with the young man at his home – he lives with his mother – Olivia accepts the friendship of the man and his mother, and her relationship with him develops into something more.  Olivia accepts the mother’s offer of help to take on a job and Olivia goes to work as a chambermaid at an elite Parisian hotel.  One of the long-term hotel guests is Coco Chanel.

Despite the French chatter of standing up to the oncoming German forces (this is set during World War II, mind you), the Germans invade and take over the hotel as their living quarters.  Olivia, has refused to leave because of her love, now, for her art-admiring boyfriend (who happens to be a French Resistance fighter). She is provided a Swedish passport, and thanks to her upbringing, speaks fluent Swedish as well.

Hermann Göring is the leading German in Paris, and he takes a liking to his Swedish maid, Olivia.  But when her boyfriend is cruelly murdered during his interrogation, Olivia joins the Resistance and feeds them information and photos from the paperwork left out in the rooms that she cleans.

Slowly, Olivia falls in love with her contact, an American she knows only as ‘Jack.’

I had no expectations going in to this book, other than I was looking forward to reading about an American studying art in Paris. What I got was a really wonderful combination of love story, historical fiction, and war thriller.

This could have been written purely as a romance, and at times the romance was just a little (a very little) too much, but the story around Olivia had her interest in the men in her life was grounded so well, and the war so dark and violent, that the romance doesn’t take over. It is, however, essential to the story.

There are two side stories going on here as well … that of Coco Chanel, and that of French actress Arletty, who falls in love with a German officer and is seen as betraying her country. I didn’t always feel the need for these stories, but they do offer interesting, different views of the war, and they broke up the story of Olivia nicely (Olivia does interact with Coco).

I listened to the Audible version of this book and I was a little surprised at how caught up I was with the story.  That speaks highly of the work of both the the author, Marius Gabriel, and narrator Karissa Vacker.

Looking for a good book? The Parisians by Marius Gabriel is a well-written historical fiction/romance set in Paris during World War II. You are likely to get caught up in the lives of the the three women featured.