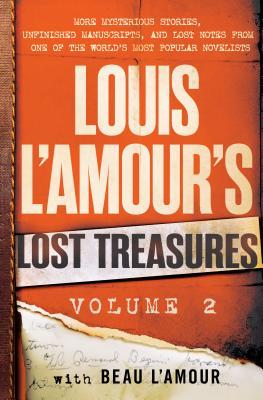 I’m the type of reader who is always fascinated by the writing process, so looking at early and unfinished works by a prolific author is something that really interests me. This is the second volume of “Lost Treasures” from the Louis L’Amour and much like the first volume, this contains a wide selection of works in various states – from the first ten chapters or so of a novel, to treatments and outlines, and even two versions of the beginnings of a story.  Not everything here is what we might expect of L’Amour (a western), but everything reflects his easy style.

While most of us know the name of Louis L’Amour as the writer of pulp western fiction, Louis wanted to branch out and write in other genres.  But Louis was a product of a specific publishing age. The model of cheap pulp paper pumping out exciting fiction helped make him a success, but it also held him back because the publishers felt his readers would only identify with his western fiction.

In addition to the two different beginnings of a novel, I also really enjoyed reading a story or treatment and then Louis L’Amour’s notes to himself – asking where the story is headed, who are the characters, what is the motivation, etc. It’s as though he had a scene in his head, which he wrote down, but he had no idea what was supposed to happen from this moment.

The Louis L’Amour catalog is now managed by his son Beau L’Amour and Beau sometimes adds his own knowledge to the creation of these unfinished works. These could be overdone, or embellished, but I get the sense that Beau is being quite straightforward – sometimes admitting that he doesn’t know the origins of a work, but can make a guess based on places Louis visited, and when.

The proposal for the non-fiction book sounds incredibly fascinating – it is a book I would definitely have read.

This is an unusual book, because not only are these not quite short stories, they truly are unfinished works.  You have to really enjoy the writing process, or the works of Louis L’Amour, to enjoy this.  Fortunately, I enjoy both.

Looking for a good book? Louis L’Amour’s Lost Treasures: Volume 2, edited by Beau L’Amour, is another great collection of early and unfinished works by one of the great storytellers.