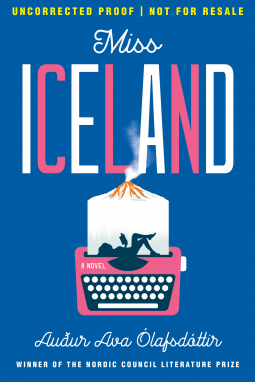 So many of the books I have read lately have been written in a best-seller style … written with the intention of capturing attention and holding on to the reader with lots of exciting action and intrigue. And by reading so much of this, I gotten into a bit of a flow – a reading pattern – so that when I started this book, I was caught off-guard and actually not very interested right away.  But about a quarter of the way in, I really connected with the main character, realized that my disinterest was my own fault, and started the book over.  And I’m glad I did.

It is the 1960’s in a remote town in Iceland. Hekla wants to be a writer, and so she packs up her Remington typewriter and heads to Reykjavik and moves in with her gay friend, Jón John. Hekla learns that the world – at least her part of it – is quite misogynistic and doesn’t want a young woman to write. What they want is for Hekla, who happens to be a pretty young woman, to be in the Miss Iceland pageant.

Hekla, a woman writer, and Jón John, a gay man in the 60’s find themselves constantly on the outside of an accept society, which brings them closer and closer together, until Hekla moves in with a man … a young man who says he is a writer.  He hangs out with all the right friends, and they talk about writing and literature all the time, but Hekla never tells him that she is writing her own novel. Instead, she publishes a few things using a pseudonym (and all of her boyfriend’s friends spend time wondering who the magnificent new writer really is.

The boyfriend is hurt at first, when he learns that his Miss Iceland-like girlfriend s actually a better writer than he, but he comes to accept and support her.  But she never feels truly comfortable with him, and move back with her gay friend, where she feels truly supported for who she is.

This book is really powerful and dark and  beautiful.

I’ve read critics who written about the darkness and loneliness found in Scandinavian literature, usually associated with the mystery novels (reaching a bit of a peak with the Stieg Larsson books). But I found that loneliness captured supremely well here, and supported with just enough of a ray of hope to have me feel good at the end.

Although set in the 1960’s, it doesn’t have to be.  There’s enough of the world that is stuck in that mindset that this, unfortunately, could take place today just as well.

This is one of those rare books that I will read again. Hekla’s quite strength and determination, the fact that she keeps focused on what she wants to do, despite everyone telling her what she should do or could do without even trying, is motivational.

My only complaint is a technical one … my advanced reading copy did not format well for the Kindle and I sometimes struggled just to follow a sentence or understand when there was a break, but it was definitely worth the effort of sticking with it and reading to the end.

Looking for  good book?  Miss Iceland, by Auður Ava Ólafsdóttir, it a tremendous, motivational, and somewhat dark book about a a young woman making her own path in a very male dominated world.