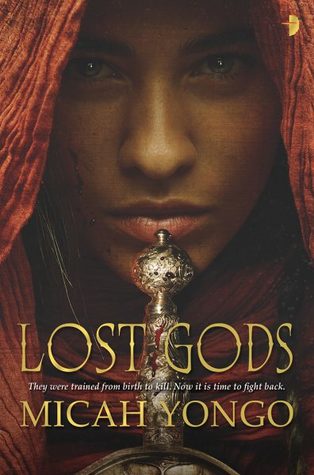 I am beginning to think that I am just not interested in reading epic fantasies.

Lost Gods by Micah Yongo takes the traditional epic fantasy themes and attaches them to African legends and mythology.

Neythan is a teenager who is being trained as an assassin with the elite but mysterious brotherhood of assassins known as the Shedaím. Nethayn assumed this brotherhood would stick by him for the rest of his life but when one of his closest friends is murdered and he is framed for the killing, Neythan tries to prove his innocence by going after his accuser while avoiding the rest of the brotherhood who are now looking for him. What Neythan discovers is that there is much more to the Shedaím brotherhood than he imagined.

I started off really interested in this book.  The uniqueness of the African sensibility that Yongo brings to a fairly standard fantasy story was really intriguing and engaging. And then he got into the world-building aspect and slowed everything down so that everything could be explained. This seems a pretty common trait in epic fantasies. Some people really seem to like it, others, such as myself, don’t.

The story seems to take a back seat to the sense of awe … look where we are … look at all this that’s different from what we know. Just as we start to get a progression of character and story, we get pulled away from it in order to be presented with something new, never quite letting us establish real interest or real involvement with what’s being presented.

I just wrote “being presented” and it strikes me that this is another factor that is common in a lot of high or epic fantasy.  We’re often presented with a story, rather than being pulled into one.  I was drawn in here right at the start, but I was slowly pushed to the side as the book went on.

Hopefully the next volume will give us a little more chance to get involved, now that the setting is established, because I really did like the potential and the start here.

Looking for a good book? Lost Gods by Micah Yongo is an epic fantasy that follows a ‘non-traditional’ path, taking its roots from African legend rather than European, but gets a little bogged down in the world-building.