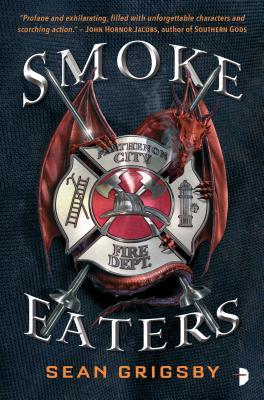 Sean Grigsby’s Smoke Eaters is one of those books which I began reading with no idea what I would find inside.  It came from Angry Robot publisher, so I assumed it would be science fantasy of some sort, but that’s about all I knew. Early in the opening chapter, Grigsby caught my attention with a high level of excitement and interest.

We are introduced to Cole Brannigan, a gruff and grizzled fire fighter just days away from retirement, at a house fire. But what at first appears to be an ordinary house fire turns out to be something much more insidious. The source of the fire is actually a dragon that has come up from the ground below the house. Brannigan rushes in to get his crew to safety, only to watch as one of his fire-fighters becomes dragon lunch. Even with his firefighter gone, the house is not empty. A group of children are in the house, hiding in an upstairs room.  Brannigan and a fellow fireman rush to their aid where the kids inform them that there are more dragons on the attack, which Brannigan fights off with Herculean effort. When he loses his oxygen mask he assumes he’s done for, but surprisingly finds that he’s able to tolerate the smoke-filled house.

Whoosh … in swoop two different teams claiming that the situation is now under their control.  A series of fire-fighting robots put into place by the local mayor, and ‘Smoke Eaters’ – a group who don’t fight fires, but fight dragons. It turns out that Brannigan’s ability to breathe through the smoke is the main requirement for becoming a Smoke Eater and he is enlisted, mostly by force, despite his nearness to retirement.  And so begins Brannigan’s journey into the world of dragon fighting.  But dragon’s may not be the worst thing out there.

Author Grigsby really does a great job of bringing us into the story and captures the camaraderie of the brotherhood of firefighters. The introduction of the world of dragons, and the wide variety of such dragons, is made quite real. It is helped that we the readers make the discovery just as Brannigan is learning about it.

The story moves along swiftly, jumping from frying pan to fire and back again, with plot points introduced along the way.  It’s delightful space opera – without the space (is there a comparable category for fantasy?).

But one thing holds this story back from being truly outstanding.

Well … not quite misogyny. Perhaps pubescent fantasy is more like it.  Grigsby, through the narrative of Brannigan, tells us that Cole loves his wife.  But what he shows us is something quite different. And despite being an older, retirement age, man, when he’s assigned to room with the attractive younger woman, of course there’s the expectation that she will find him attractive, but he will be a true gentleman and make sure he isn’t sending the wrong signals.

Whereas the dragons seem quite real and the brotherhood of Smoke Eaters feels real and the story is exciting, Brannigan’s relationships feel forced. This feels more like male fantasy (a macho male life [is there anything more macho than fighting fires?  Yes…fighting dragons!] with a wife at home and attractive young partners during the day).

The story is exciting and well plotted enough that I look forward to the next book in the series, but I do hope that the relationships are better developed.

Looking for a good book? Smoke Eaters by Sean Grigsby is an exciting new urban fantasy with a macho protagonist and some very unusual dragons. It is worth reading.