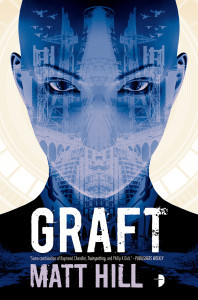 In a gritty, apocalyptic-like future, a mechanic by the name of Sol steals vehicles in order to come up with the necessary parts to fix his customer’s vehicles. When he rips-off a luxury model he comes away with more than just a source of parts for his shop … Sol finds a three-armed woman whose mind has been wiped clean from her previous existence and she’s been modified to become a bodyguard for a wealthy Londoner who wants her back. But the woman, called ‘Y’, doesn’t wish to go.  Sol and Y become privy to a vast, dark world of human trafficking through different worlds and their lives are on the line as traffickers and hitmen are tracking them down.

It is no surprise that this book was a Philip K. Dick Award nominee – this has so many of the elements we often found in Dick’s books (such as the confused hero and the unusual character who acts as the catalyst for the danger that the confused hero faces).

The book catches the reader with a specific mood, drawing us into a gritty, dirty world, more Alien with its griminess than sterile 2001. And everything everything feels unfortunately much too real. Hill has created a world in which the reader can practically smell the garbage.

I like this kind of dystopian fiction, but to make it really work, the characters really need to be alive to the reader and Sol, unfortunately, is not, for me. He plays his role of disaffected anti-hero a bit too well and I just don’t care about what he’s doing.

‘Y,’ on the other hand, is fascinating but we don’t get quite enough of her to make up for what we get (but don’t care about) for Sol.  Perhaps it’s the mystery of her – what we don’t know because Hill only teases us about her – that makes her so intriguing. But I feel this is really Y’s story but not presented as such.

I happened to finish reading this at a time when human sex trafficking was the lead story in the daily news for awhile, which made this story even more relevant, sad, and frightening.

Overall, this book fails to really catch on, despite the gritty, real world and the intrigue surrounding the modified, trafficked woman, Y.

Looking for a good book? Graft, by Matt Hill, has a great dystopian world and a fantastic premise, but gets lost behind a rather dull main character.