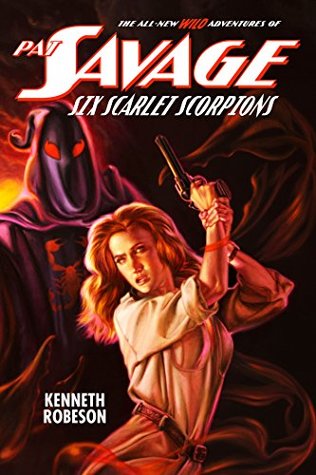 Okay… guilty pleasure time! I grew up reveling in the worlds of pulp action heroes and the greatest of these, for me, was Doc Savage.

And apparently I’m not alone in this appreciation for classic pulps – there are some keeping the characters alive by writing new stories, with full approval from the owners of properties, and they’ve built on Doc Savage’s coterie. Doc’s sister, Pat, is embarking on her own adventure in this book, Pat Savage: Six Savage Scorpions (under the house name of Kenneth Robeson).

Pat is accompanied by Doc’s faithful friend, Colonel “Monk” Mayfair, to his Monk’s home town of Tulsa, Oklahoma where Pat is looking to invest in oil and make some good money. Quickly Pat’s help has been requested and she insists on solving the mystery herself.  But things turn sour quickly (and often, of course) and both Pat and Monk find themselves wanted for murder. Now Pat has to solve the mystery and clear her name as well, and do it in secrecy.

The story is a classic Doc Savage style story, with ruffians and tough talk and plenty of guns a-blazin’. Our heroes appear to get out of one scrape only to find themselves with a bigger problem, until they can put all the pieces together in front of the honest, upright folks representing law and order.

This was definitely a fun read, taking me back to my early teen years when I was reading those early Doc Savage novels.

While the addition of Monk made the connection to Doc Savage even stronger, I would have preferred for Pat to truly strike out on her own and pull together her own team of associates. Should I read the next book in the series (and I’d like to) I hope that Pat will truly grow into her own series.

Looking for a good book? If you like the style of classic pulp heroes, then try Pat Savage: Six Scarlet Scorpions by Kenneth Robeson.