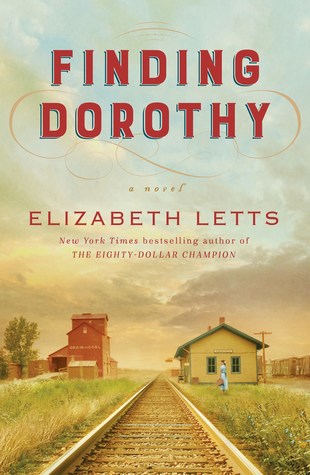 This is such a beautiful book. It is in part a double biography (of both Lyman Frank Baum and his wife Maud Gage Baum) as well as a look backstage at the filming of one of the most iconic films of all time. And of course it’s fiction, with a beginning, middle, and end to the story (it’s surprising how many books don’t have this essential aspect).

We learn early that Maud is the daughter of a suffragette who championed hard for women’s rights and Maud was going to have every opportunity possible, including going to a boys high school and a prestigious college (Cornell) – which was certainly not common in the late 1800’s. And like many college students, a new world opens up to her as she meets and interacts with people of different backgrounds.  It is through connections at college that she meets “Frank” (Lyman Frank Baum) and her life changes forever.

In many ways, Maud puts her own suffragette convictions aside to stand beside Frank, performing on stage with him and his touring acting company. We see Frank not only through the eyes of a wife who is in love with her husband, but through the eyes of a smart, reasoned woman who doesn’t necessarily get caught up in the act of doting on her husband.

Tragedy befalls the company and they lose everything, and it’s off to the next adventure that Frank has in mind. And when disaster strikes, they are off again. We see that despite failure after failure for Frank’s ventures, that Maud sees in him a quality of unapologetic positivity and ultimately a sacrifice of his own ideals in order to put his family first (with a little prodding from Maud).

But we also see an older Maud.  A Maud who storms into the office Louis B. Mayer who is producing The Wizard of Oz film – her position, she informs us, is to ensure the magic of the books remains.  And we see that same Maud, bolstering and protecting the fragile girl who is trying to find the Dorothy for the film, and we see the Maud giving all the right encouragement to the songwriters to help them find the necessary notes for a special rainbow song.

The writing is beautiful and lyrical which more than makes up for those instances where Maud maybe seems a little super-human and single-handedly saves the film.

And let’s be honest … a big part of the magic in this book is the magic of The Wizard of Oz itself.

Author Elizabeth Letts works in so many nods to the book series and the film, but she does so gently, letting the reader make the connection (and if you only know the film, you will miss some of these).

This is easily one of the best books I’ve read this year and I highly recommend it.

Looking for a good book? Finding Dorothy by Elizabeth Letts is a nearly perfect read.