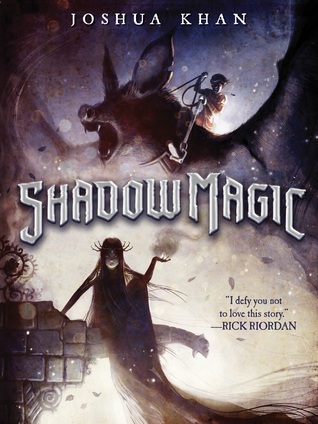 There is no shortage of fantasy books for young readers, as authors and publishers continue to try to keep youngsters reading after finishing the famous young wizard series. One of the things that Joshua Khan’s Shadow Magic does that I haven’t seen too often is play up the darker side of magic and wizardry.

We mainly follow two characters. Thorn, a daring, adventurous young boy who has been sold into slavery and Lilith (Lily) Shadow who becomes the ruler of Gehenna when her parents and brother are killed in one day.  The sudden leadership is problematic just with trying to learn all that a ruler needs to know, but it becomes even more complicated by the fact that as a girl, magic is forbidden to her, but as a ruler she needs to bring forth the magic of the undead. Thorn meanwhile, is on his way to Castle Gloom in Gehenna with his new master, an executioner, where Thorn and Lily will meet and decide to break some rules because really things can’t get much worse for either of them.

As I mentioned, we have a lot of dark magic here along with vampires and zombies and other such creatures. But in a nice twist, it is the dark creatures who are ‘good’ in this story.

When I read a fantasy like this I often think back to something I heard Bruce Coville talk about, which is the CTPP quotient.  That’s Cool Things Per Page.  The popular series about the boy wizard has a very high CTPP ratio, which is part of what makes it so popular.  Shadow Magic also has a pretty high CTPP ratio (anyone can fly on a dragon, but how many people actually get to fly on a giant bat?!) so it should easily hold a young reader’s attention.

But of course Cool Things alone are not enough to attract readers and fortunately author Joshua Khan also gives us a complex and interesting story with the promise of many more to come.

This is definitely worth checking out if you are looking for a new fantasy for younger readers.

Looking for a good book? Shadow Magic by Joshua Khan is a little on the darker side but is a good fantasy for readers looking for something after reading the popular boy wizard stories.