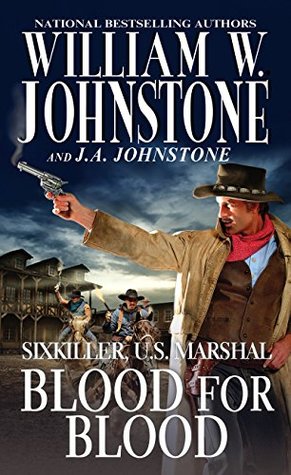 This is now the third William W. Johnstone (and J.A. Johnstone) book that I’ve read, which was part of my goal for “Western Week.”  Like the other two, I enjoyed the read, found the main character interesting and somewhat unique while still being true to the macho-and-above-average man who western heroes tend to emulate, though the book also felt a little ‘padded’ – extending narrative to fill the pages to complete a book length.

Blood for Blood is the fifth volume of the ‘Sixkiller, U.S. Marshal’ series. Not having read any of the other volumes I can’t say what we might be missing but I did not notice anything in the course of the story that made me feel like I was missing a crucial piece of information.

Marshal John Henry Sixkiller (who is of Indian descent) is sent by a state judge into Kansas to track down a man who has been killing the jury members who convicted a murderer by the name of Henry Garrett. The judge is certain it is Garrett’s brother.

After arriving in Kiowa City, Sixkiller is confronted by a criminal who knows him as a Marshal. When the man tries to draw on him, the lightning fast Sixkiller guns him down in the local saloon.  Instead of admitting to the local sheriff that he’s a Marshal, Sixkiller decides to use the incident to build a reputation as a criminal and is jailed and manages to escape, ensuring that he can be brought into the fold of a criminal gang with ties to the now-deceased Henry Garrett.

What Sixkiller doesn’t suspect is that the mastermind behind the gang is an attractive and extremely viscous woman, Lottie Dalmas, who was Garrett’s girlfriend, and that Garrett’s brother might just be a pawn in the whole thing.

And if Sixkiller thought Dalmas was being ruthless to the jury that hanged her boyfriend, wait until he sees what she does to the town that failed to stop a U.S. Marshal from infiltrating her gang!

I liked the book the most of the three Johnstone westerns I’ve now read.  Other than the contrivance of a Marshal sandbagging a sheriff by pretending to be a criminal who escapes from jail and then conveniently turns himself back in when he’s hurt, this book had a good story line with credible characters. The good guys are still ‘white hat’ good guys and the bad are clearly bad, but that’s part of the charm of reading a western like this.

If you like the western genre then this is a book to read.

Looking for a good book? Blood for Blood by William W. Johnstone and J.A. Johnstone is an adventurous western with a strong central character and is a fun western read.