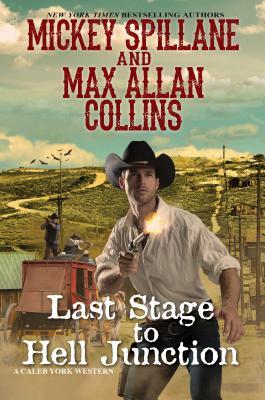 A stage coach, bound for Denver never arrives.  Aboard the coach are two women and a wealthy banker. A dead stagecoach driver, riddled with bullets is the only clue. Sheriff Caleb York has a vested interest in tracking the coach down as both women have been dating York, each trying to get him to commit.  The banker also has a connection to York – he is a prime investor in Trinidad, New Mexico … York’s territory.

York gets a tip on what happened to the stagecoach when he hauls a man in to jail after a poker game dispute.  Now York will have to go face to face with a den of thieves in order to see if there is anyone left alive to rescue.

As one might expect with a Spillane character, our hero here is a tough as nails and in many ways this book reads more like a hard-boiled mystery rather than a classic western – it just happens to take place in the old west.

The action moves swiftly as one might expect of a hard-boiled western.

The character of Caleb York is a bit stereotypical – tough, no-nonsense, macho without much background to really identify himself. None of the other characters have much to identify themselves, either.  They are stock characters used to drive a plot.

Of the books I’ve read through “Western Week” on my blog, representing three different authors, this one is probably the weakest.  It relies more on common tropes and stereotypes. The mystery, at least, holds some interest.

Looking for a good book? Last Stage to Hell Junction by Mickey Spillane and Max Allan Collins is a moderately fair mystery in a western setting but if you are looking for a more classic style western, there are better choices.