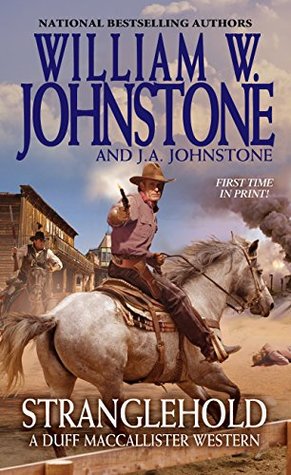 Charles McGregor, a former battalion commander from the Black Watch Regiment of Her Majesty’s army is now in New Mexico as the mayor of the mining community of Antelope Wells.  Unfortunately for McGregor, there’s a powerful madman named Ebenezer Schofield, looking to take over all of the ‘boot heel’ of New Mexico and make it its own country, which Schofield will rule, and Antelope Wells happens to be in the dead center of Schofield’s planned new country. Schofield has already proven his ruthlessness by having his army randomly killing townspeople (women and children included) in all the other towns he’s taken over, just to make a statement, so McGregor knows that he and the citizens of Antelope Wells will need to stand firm against Schofield.  McGregor also knows that he’ll need the help of his own army … Duff MacCallister.

This is the first book I’ve ever read by William W. Johnstone (and J.A. Johnstone) though I’ve got a few of them in my queue to be read and I’ve read and reviewed a few westerns prior to this. What surprised me was the … simplicity … of this story-telling.

The story was very straightforward with some back and forth between points of view (Schofield’s, McGregor’s, MacCallister’s). Things get a little bit monotonous as we repeat action in an attempt to build tension, but we don’t really need to see Schofield’s slaughter over and over, and we don’t really need to see his attempts to conquer Antelope Wells over and over – although I admit this was somewhat interesting to see how Duff and McGregor would repel the attacks.

There was a fair amount of ‘telling’ rather than ‘showing’ throughout. This is a story, or a format, built for speed in order to simulate lots of action and there’s no point in slowing that down by getting the reader actually involved in the story.

There was a certain charm about the story.  I liked Duff and his cadre of companions (particularly Wang Chow). In fact I wish I had gotten to know them a little more.  I see that this is the ninth MacCallister story, so perhaps there’s much more to learn about the character(s) in some of the other books.

This is a great beach read for western fans. While not among the best westerns that I’ve read, the characters have a uniqueness about them that should entertain.

Looking for a good book? Stranglehold, by William W. Johnstone and J.A. Johnstone, is classically-styled western where the bad guys are very clearly bad and the good guys are squeaky-clean good and you know how the story will go, but the characters make the journey fun.