HE STARTED IT!: MY TWITTER WAR WITH TRUMP – Danny Zuker 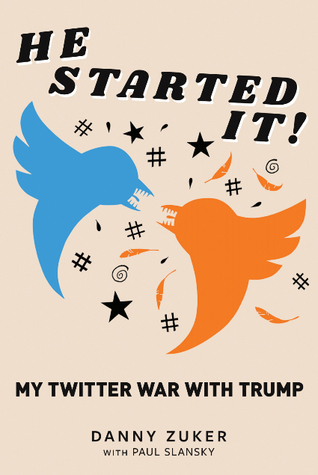 While I would very much like to keep politics out of this blog (and this review), that’s going to be a little difficult with the reviewing of this book.

First I feel as though I need to note that I am not a fan of Donald Trump.  Not his politics, not his behavior, not his tweets.  In fact, I requested this book hoping to get a few laughs and to see him brought down to size a bit.

I say this because I didn’t enjoy this book and I don’t want it presumed that I’m simply a crazed fan of the POTUS and trying to enact some strange revenge. No … I just didn’t like the book.

This book, featuring mostly just the actual twitter exchange between the POTUS and a Hollywood writer, really doesn’t have much meat to it at all.

I feel as though there isn’t much of the Twitter war here at all, but rather just select bits of the longer Twitter battle.  If that’s not the case, then this “Twitter War” has been REALLY exaggerated.

Danny Zuker, the Tweets author, explains his intentions in the tweets and how Trump is clearly stymied by Zuker’s wit. And it’s a good thing he explains how he manages to ‘zing’ Trump because honestly, I’m not sure I’d get them all. Which suggests to me that Zuker is as enamored with himself and his own wit as Trump is with his.

Let’s face it … Trump is not a smart man. He’s a bully and a liar (I base this on his public behavior) he believes the truth is whatever is said the loudest and most often.

But he ‘wins’ this twitter war because he managed to engage someone.  And, sorry Zuker, telling someone that you are not responding to their requests is a response. It’s a childish, school-child response, but it still is a response.

And that’s really all this is – a school-yard brawl with abbreviated words. The more intelligent person thinks they win because they are smarter and quicker-witted and use better words. The bully thinks he wins because he has gotten attention and engaged someone to go toe to toe with him – and because he’s less intelligent, he doesn’t know when he’s beaten. In the end, we all lose because the rest of us wasted our time watching it.

I like that the proceeds from this book go to funding programs that Trump has cut, but I really wish I could recommend this book so that it would raise more money.  Unfortunately it’s just a pissing contest that isn’t very exciting to watch.

Looking for a good book? He Started It!: My Twitter War with Trump by Danny Zuker contains some of the public tweets he and Donald Trump exchanged over a few years. Once was bad enough … we have to experience them again and again?