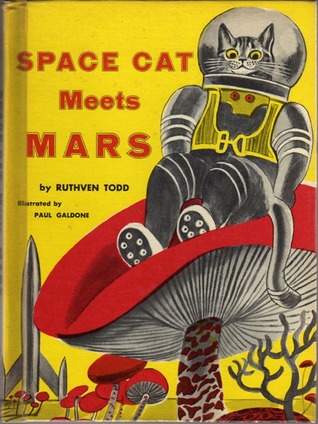 Space Cat is back in the third volume of this 1950’s era children’s book!

Flyball is now a seasoned ‘space cat’, flying regularly between the Earth and the moon and having now visited Venus as well.  So when the rocketship is caught in the gravity of an asteroid, Flyball trusts his human captain, Colonel Fred Stone, to do the mathematical figuring to get them out of any trouble. But maybe Colonel Stone could use some better luck because they are thrown off course and headed to Mars.

Mars turns out to be a pretty fascinating planet, with giant mushrooms and lakes with plenty of fish. But Mars holds an even bigger surprise for Flyball … Moofa.  Moofa is a female feline – a native Martian! With stripes running the long way down her body and a beautiful red coat of fur, Flyball is quite smitten with her. Flyball and Moofa strike up a friendship and when Flyball takes her back to his ship to meet Fred, the Colonel welcomes her aboard.

This book is equally as outrageous as the previous two books when it comes to the science involved. But this book was written at a time when space travel of any sort was still just science fiction, but also the idea of visiting the moon or the planets was looking like it become more and more likely, fueling much speculation.

This book was also written at a time when telling a fun, fantastic story for children was key. Today’s children’s books appear to need an educational element.

The story is just plain fun. Flyball is a character that kids will smile at and even the youngest will understand, on some level, the implications of meeting a pretty girl cat.

I enjoyed this book. Ruthven Todd’s story moves along nicely, keeping the young reader turning pages to find out what happens next, and Paul Galdone’s art – very  typical of the 1950’s children’s book style – is whimsical and eye-catching.

Looking for a good book? Space Cat Meets Mars by Ruthven Todd and Paul Galdone is a delightful children’s re-print from the 1950’s that is simply fun to read.

The fourth (and final?) volume of the Space Cat series includes not only Flyball’s new female friend, Moofa (from Mars), but also a pair of kittens – Moofa and Flyball’s children.

The kittens, Marty and Tailspin, have quickly become space travelers, with Space Cat and Moofa showing them how to handle themselves in space. And now, in this volume, they join Colonel Fred Stone and his friend Bill on a trip to Alpha Centauri.

Along the way, the now sizable party investigate a completely new, heretofore unnamed planet. This is what being space explorers is all about after all. And what they find is a fascinating array of animals that look exactly like Earth’s pre-historic animals. There are tyrannosaurs and pterodactyls and triceratops and stegosaurus’. It’s like traveling to Earth’s past. And as exciting as it may be to see these animals up close, Tailspin and Marty are still just a pair of kittens who don’t care too much about what they see and, like the siblings they are, they rough-house and wander off.  But this is a dangerous planet to become lost on! Fred and Bill have to take their helicopter out of the spaceship in order to search for them!

I’ve enjoyed these Space Cat books, despite the quite obvious scientific flaws. It predates most of what we know about the planets and satellites in our solar system and it’s fantasy for young children – books to get the imagination flowing.

And that’s part of the problem with this title.  It really lacks imagination. Of all the wild and crazy things author Ruthven Todd could put on this new planet (and he’s already come up with some pretty crazy things), he instead falls back to something old. Yes, dinosaurs have captured children’s imagination for about as long as we’ve known about them, but this one just doesn’t fit well within the Space Cat series.

It doesn’t help that we’re almost trying to do too much, with the addition of the kittens, the introduction of a new human, and visiting a planet of dinosaurs. We’re trying to hold on to the attention of young children after all. (And today’s youngsters have a very short attention span.)

I’ve enjoyed this series quite a bit and I’m glad to have this fourth book if just to keep the collection complete, but as a book/story, this one is easily the weakest of the lot. As always, though, Paul Galdone’s art is funny and captivating.

Looking for a good book? Space Cat and the Kittens by Ruthven Todd and Paul Galdone is not quite as enjoyable as the earlier books in the series, but a moderately fun reprint from the 1950’s.

Space Cat and the Kittens