THE CHESSMEN – Peter May 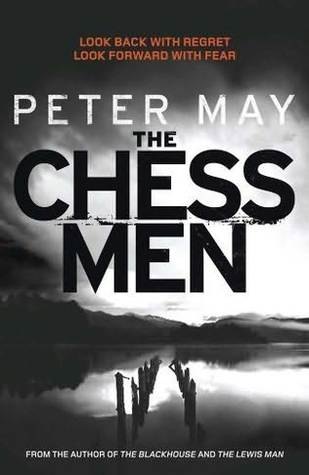 The Chessmen by Peter May is the third book in The Lewis Trilogy.  I’ve read the first book and reviewed here on my blog. I enjoyed much of that first book but only gave it three stars because, being the first book in a trilogy it was mostly story and character set-up and lacked a tight story … which makes a little sense if you are looking at the entire series rather than just a book.

This particular book is much tighter and stronger for it because it is the climax of the series.

Fin Macleod left the backwoods backwaters nearly two decades earlier, moving on to become a police detective in Scotland. Now he is the head of security on the privately owned Lewis Estate. He is investigating some illegal game-hunting on the island when he runs into local poacher ‘Whistler’ Macaskill. Fin and Whistler have a history together from their youth.  Whistler also holds on to a secret that will change a lot of the dynamics of the locals if it should be revealed and now Fin will have to make some tough choices.

I’m not usually a fan of flashbacks but in this book we look back at Fin’s early days, when he was part of a small band that had aspirations of becoming something bigger and worked hard to achieve that goal.  The players in these scenes are mostly relevant to the modern-day mystery.  The sub-plot/set-up story, characters, and their relationships are all quite interesting.

I was also incredibly fascinated not just by the climax of the story, but by the denouement! How often is the denouement as interesting as the climax? But while Fin’s delivery to the court almost comes across as a Hollywood film spectacle-style speech, it’s still rousing and makes for good drama.

This was a good, strong story with interesting characters.  I’m now curious as to what happened in the middle book of the trilogy since I never felt like I was missing anything.

Looking for a good book? The Chessmen by Peter May is a wonderful mystery that explores characters and their relationships with one another and is a good rainy-day read.