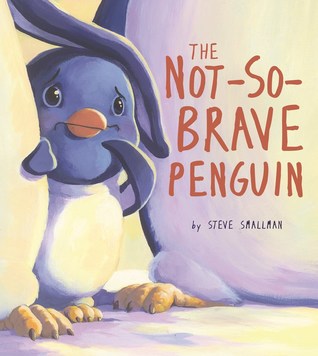 The Not-So-Brave Penguin by Steve Smallman is an adorable little book. Who doesn’t love penguins?  And who can resist a not-so-brave penguin that steps up and does something brave?

Percy and Posy are young penguins. Percy is outgoing and adventurous while Posy is cautious and timid. Percy loves to slide down icy slopes on his bottom as fast as he can, but the idea is terrifying to Posy who also doesn’t like loud noises or the dark.

One day a new iceberg floats up near to the penguin home and Percy can’t wait to investigate – hoping there might be some great new slopes to slide down.  Posy, of course, won’t go.

As night comes on and Percy isn’t back, Posy gets nervous and the adults don’t seem too concerned. At first light, Posy rushes over to the new iceberg and slides down a long slope to find Percy hurt at the bottom where he is grateful the Posy came to find him.

This book has just about (but not quite) everything you want in a children’s book.  Cute pictures that kids will love to look at. A cuddly animal. A moral that would hit you over the head if you were a little older. And a story that promotes self-determination and individuality.

But it is missing something for me.

I shared this with my wife and my now older children to see if they had similar reactions.  They each thought it a nice book but thought that something was missing – though they couldn’t pinpoint what, exactly, without some prompting.

What we don’t get is why Posey rises above herself and goes after Percy.  While we see them together in many pages of the book, we see them as contrasts.  While we might assume that they are close friends, we don’t get that, either in the story or in the pictures.  They have different likes, they do different things, and nowhere are we told they are close friends.  So why is looking for Percy so important to Posey that she conquers her fears for him?

Of course assumptions can be made and actually having a conversation about a book with a child is an important part of reading to a youngster, but I still wish there was something other than inference about their relationship to lead us to Posey’s actions (especially given the adults’ lack of concern).

Looking for a good book? Not-So-Brave Penguin by Steve Smallman is a cute and charming children’s picture book that is likely to be a favorite for a child’s early years.