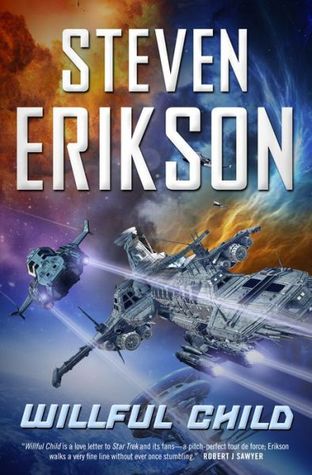 I requested this book four years ago and over time I’ve forgotten what it might have been about so I began to read this ‘blind’. Lately I’ve also been interested in reading some humorous fiction, so imagine my delight to begin reading and discovering that this isn’t just a humorous story, it’s a parody that straddles that fine line of being over the top but manages to stay just inside the line.

The Willful Child is a spaceship. It is crewed by professionals and captained by Hadrian Sawback – an egotistical frat-boy type who likes to push peoples’ buttons. He is Captain James T. Kirk times ten. The ship has an AI computer by the name of Tammy – short for Tammy Wynette. And the story…? Take your top ten favorite Star Trek episodes, mash them up and fill them with infantile, sexual humor and we almost have Steven Erikson’s homage.

And let me be clear … in this particular case ‘infantile, sexual humor’ is a good thing.

Star Trek has been parodied countless times, so we’re not exactly in new territory here. This could easily be compared to one of the better known parodies, Galaxy Quest (or even the more recent The Orville) and the reason these parodies work is because the parody aspect is a launching point for the story. The characters we recognize already because they are each a pastiche of the crews of the U.S.S. Enterprise.

There is an overall story arc here, but the book reads more like a series of television episodes and I rather liked this experience. It made it easier to read this book in smaller chunks. These shorter ‘episodes’ are often recognizable as spoofs of Star Trek episodes. And like the show it’s based on, there is a hint of a message – applicable to today’s reader, but hidden within a humorous future.

The one down-side to the story is Captain Sawback. His gallivanting seemed appropriate to the story, but he came across as just a tad too much of a jerk. By itself that would be fine, but it does then call into question why others follow him so blindly.  Fortunately, I felt Sawback redeemed himself as one point.

I enjoyed this as lighter diversion and when I saw that there was a series, I’ve set out to read more.

Looking for a good book? Willful Child by Steven Erikson is a playful parody of Star Trek and well worth reading if you enjoy a laugh with your science fiction.