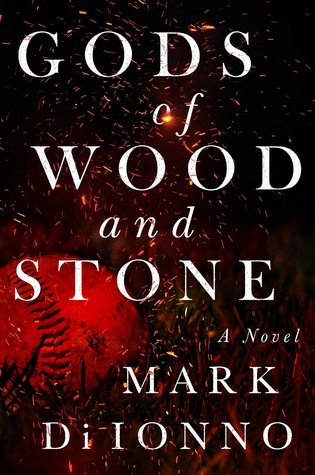 In Mark Di Ionno’s Gods of Wood and Stone, two middle-aged men come to realize that they are dinosaurs in a modern world.  Though their worlds don’t intersect directly through most of the book, the men have much in common.

Joe Grudeck has spent his career as a baseball player. As a member of the Boston Red Sox, he built a reputation as a powerhouse – one of the last of the stronger, old-time players and now he’s about to be inducted into the Baseball Hall of Fame. But Joe knows that what this really means is that he’s about to be forgotten except for those who wander into the museum of old ball players.  And what does he have to show for a career in the pros? Some money and a whole of random sexual encounters.

Horace Mueller is a blacksmith. He works at a museum showing visitors what the old life was like, smithing for goods.  Horace’s wife has run the family into deep debt and is now leaving him.  His wife Horace won’t miss, but Horace wants his son, Michael, to grow up understanding what it means to be a man.  But Michael just wants to play baseball.

If there’s such a thing as ‘chick lit’ then this would be the opposite – a story for men that men will understand and in which women are not particularly well portrayed.  Really.  The women here are not to be envied. There’s either Horace’s wife – a bitch who spends money without thought and tries to take away the one thing the man wants (his son); a bunch of girls ready to hop into bed with a famous ballplayer; Michael’s boss – and the subject of his fantasies – who’s really just one of the girls ready to hop into bed with a famous ballplayer; and the one female who stands out – Grudeck’s high school girlfriend, now available again, who keeps Grudeck at arm’s length while leading him on.

All through reading this book I was mentally writing my review.  I was completely entranced.  I recognize the male fear of losing the old ways.  Of feeling like a dinosaur. Finally a writer who ‘gets’ us.

The allusions here are strong and the characters are ripped from Greek pantheon. It’s exciting and invigorating.

To say I was let down is an understatement. I wasn’t sure where this was going to lead, though I had some hopes. Unfortunately, the story took a turn. Beginning with Michael’s 180 degree turn in behavior and showing a sudden spark of testosterone that comes out of nowhere, through his father’s similar turn, to Grudeck’s disappearance in the story, the last three chapters take away too much of what this novel built so nicely.

From a 4.5 to 5 star book this dropped down to 3.5 because I walked away at the end with such a sour taste to such an observant and otherwise strong book.

Looking for a good book? Gods of Wood and Stone by Mark Di Ionno is a book for men that recognizes a man’s fear of fading masculinity. Most of the book is a wonderful read but the ending is a let-down.

Gods of Wood and Stone