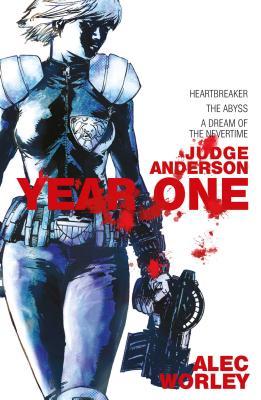 Is it strange to request a book based on a comic that I’ve never read? I’ve also never seen any Judge Dredd movies.  But I am aware of the concept and as a science fiction story I was very interested in reading this. The idea of a ‘judge’ with telepathic abilities is really intriguing to me.

Judge Anderson: Year One is actually three novellas in one book (Heartbreaker, The Abyss, and A Dream of the Nevertime).

I enjoyed Heartbreaker the most of these three.  As an introduction to this character of Judge Anderson, this was a great way to learn about her abilities and personality.  The story was generally fine (a little more on the stories in a moment) and had plenty of action to keep the reader entertained.

The Abyss also had plenty of action but I started to get confused as to her status as Judge.

The last of these really did nothing for me. By this time I felt I understood the character as well as I was going to. I was really hoping for more of the character.

Which leads back to my thoughts on the stories…. Overall this was fine, but not in any way spectacular.  This read like comic books/graphic novels without the art.  They were full of adventure, but slow on character development.  Characters develop in comics, but at a very slow pace and they tend to assume the reader already knows a fair amount about them. I was definitely hoping that since this was a novel (actually a collection of novellas) that we’d get more character-driven stories – dive into who this is – but we don’t.

It wasn’t a bad read, but I was definitely hoping for more.

Looking for a good book? Judge Anderson: Year One by Alec Worley reads like a comic book without the art. It’s full of action, but not much more. A good airplane read.