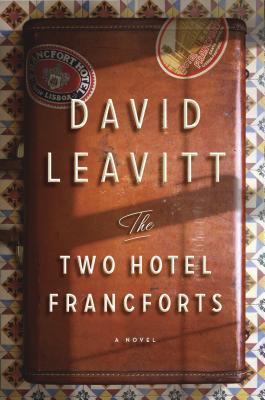 In 1940 the only neutral port in Europe is in Lisbon, Portugal.  Here two couples meet by chance as they both await safe passage on the SS Manhattan to escape the brewing war.  But Lisbon is filled with refugees and spies and one needs to be careful with whom one confides.  One couple is staying at the Hotel Francfort while the other is staying at the Francfort Hotel.  What are the chances? Well…good, actually since both hotels exist in town.  But it’s a conversation starter and the couples are able to find some comfort in sharing their pining with one another, eager to get away.

Julia Winters and her husband Pete harbor some fears of the Nazis who are around as Julia is Jewish.  They left their Parisian home and are hoping to get to America as soon as they can.

Edward and Iris Freleng, wealthy bohemians, just want to continue their lifestyle without fear of the Nazis.

An affair blossoms from among the couple, but not quite what one might typically expect.  It is a homosexual affair between Pete and Edward. Though not homosexual, Pete can’t help but be excited by the sexual attention and magic of Edward’s presence. Julia slowly begins to expect something, but assumes it’s an affair between Pete and Iris – an affair that Pete can easily deny.

Although this book got a lot of press and acclaim when it first came out (or so I recall), I found this to be rather dull.  Author David Leavitt’s writing is crisp and he captures the sense of 1940’s Europe well, and the two couples are interesting enough to keep turning pages, but the entire book seems to be about a homosexual affair with at least one partner an unlikely participant. That being the case, for me, it held little interest.  I’m not opposed to homosexuality as a concept or in practice, but for me personally it’s not something I care to participate in, even as a voyeur reader.  And really, there was nothing else in the book to appeal.  Yes…there’s more than just the sex, there’s the whole concept of opening up to new horizons and the consternation of cheating on a spouse. But the book sets out to be ‘about’ something, and the big picture here is nothing more than sex between two men.

I’d much rather be reading Hemingway.

Looking for a good book? The Two Hotel Francforts by David Leavitt is a philosophical yearning study of homosexuality in an era of brutality and war.