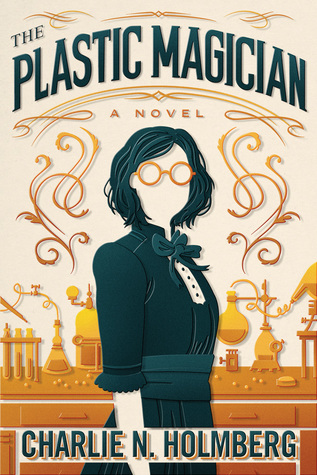 I’ve been quite a fan of the Paper Magician series by Charlie N. Holmberg.  I’ve recommended the series to many people and every one has come back to tell me how much they’ve enjoyed it. Now Holmberg is keeping the series alive with what is part sequel and part spin-off.  There’s still plenty of magic afoot and we’re still following an apprentice, but instead of the erstwhile Ceony, we are now following American, Alvie, as she arrives in England to apprentice with a master plastics magician.

It’s quite a new adventure of Alvie, learning new customs as well as trying to grow in her chosen magic art. Fortunately she is apprenticed to a magician who is as dedicated as she is to improving and finding ways to accomplish her goals.  This magician, Marion Praff, couldn’t be more charming and welcoming to Alvie (and fortunately he’s married!), but not everyone is enthralled by Praff and his continued showings of new magic at the annual conference, which is not too far away.

Alvie is an inventor at heart and when she presents an idea to Praff, and he encourages her and takes it on in order to help develop it for the next conference, Alvie is thrilled.  But a number of magicians in the area are reporting burglaries and Alvie worries that her and Praff’s remarkable invention – which should revolutionize Polymaking – is at risk.  She has no idea just how much at risk her invention – and her life – really is!

I’m thrilled to be back in this world of Holmberg’s.  It’s a great, rather unique, world that she’s created, and while both her leading characters (Ceony and Alvie) are similar in many regards, it’s not surprising since they should be about the same age, being apprentices.  The mentors are different enough (if you’ve read The Paper Magician series, you’ll understand – if not … you should correct that right now!) but both appealing as mentors. (Though it will be delicious when she sometime chooses to write of an apprentice with one of the villainous magicians!)

I did feel that things went a little too smoothly for lucky Alvie. She doesn’t seem to have to work too hard for her glory. Even when things go terribly wrong, she manages to get away and run into good people who trust and believe her immediately. Though the climax scenes during her trouble is well written and quite exciting.

It will be interesting to see what Holmberg comes up with next for the series, and I will continue to count myself as a fan, though this book didn’t quite live up to the excitement and thrill of the first series.

Looking for a good book? The Plastic Magician by Charlie N. Holmberg, is a follow-up/spin-off to the Paper Magician series and while it doesn’t have quite the excitement, it is still an enjoyable story.