ALEX AND THE OTHER – Philippa Dowding 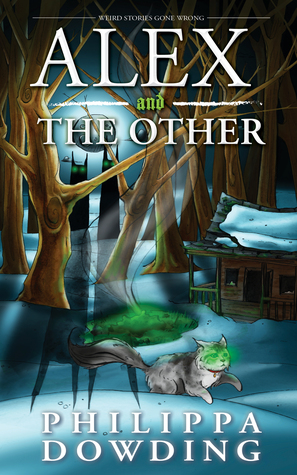 Not since the Goosebumps series have we had good ‘weird’ stories for young readers until Philippa Dowding began her Weird Stories Gone Wrong series.  Alex and the Other is the fourth in this series, and though I’ve only previously read the first book in the collection, it’s definitely a series to consider – especially if your younger reader enjoys stories that are slightly, well, weird.

Alex tends to feel a bit invisible. He’s very lonely at school, his parents are gone, and to make it all worse – his cat is missing. Could things get any worse for a young boy?  Well…yes, it could. In the haunted bathroom mirror at school his reflection talks back to him and he is visited by strangers who whisper “Beware the other” over and over.

Over the next few days, his sense of being invisible becomes more and more real to him as the other students and then the teachers look right through him.  Soon it’s as though he didn’t exist at all.  But when he wonders why no one is even concerned that he’s disappeared he realizes that there is another Alex that has taken his place.  Not just another Alex, but an out-going, popular Alex.  An Alex who becomes the star basketball player.  An Alex who is greeted and smiled at in the school halls.

This Other Alex is the only one who can see Real Alex, and he let’s Real Alex know that he has no intention of giving up being Alex, so Real Alex has to find a way to get his life back, or give it up altogether.

Philippa Dowding has perfectly captured the middle school students’ fears and dreams.  The sense of identity and discovering ones limitations and dreams takes shape about this time in a child’s life and this book actually helps a child realize that such fears and fantasies aren’t unusual and that one can take control of his or her own life at this point.

Looking for a good book? Alex and the Other by Philippa Dowding is a charming ‘weird’ story with a message subtle enough to not make the reading feel didactic.  It’s great to have this series available!

Alex and the Other