AMONG THE FALLEN – N. S. Dolkart 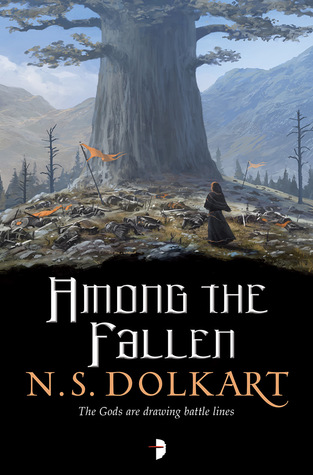 A band of wanderers who were thrown together as they fled their homeland and thrust into a quest that seemed unattainable have returned in Dolkart’s Among the Fallen. Now this group has largely gone their own ways, but because we were brought into this world with this band of misfits, we continue to fallow their stories, even though they’ve gone their separate ways.

In some ways, this separation doesn’t work quite as well for me. It was their differences, working together, that I really enjoyed the first time around.  Still, the characters are strong and unique and this world that Dolkart has created remains fascinating.

While I enjoyed the character of Bandu in the earlier volume, I thought that her character here had not grown as much as the others had – or perhaps she had gone in the wrong direction this time around (wrong, at least, to keeping me interested in her – perhaps not ‘wrong’ in the character’s arc).

What Dolkart has done exceptionally well is create an epic fantasy where the characters themselves are the primary focus and their journey is secondary. We don’t usually see these epic adventure stories this way – usually there is a goal in mind that is of most importance and then the characters who go after that goal are of second importance. It is because we care about and are following these well-drawn characters, that they can split up as they do in this book, and we are still interested in their journeys – both their individual journeys and their group effort. Still, individually they are a bit less interesting than they are as a group and I look forward to the next book in the series and I hope they are able to work together despite their differences.

N.S. Dolkart is a writer to keep an eye on.  This series is proving to be quite remarkable in a genre filled with epic adventure-type stories.  Let’s hope he can keep it up.

Looking for a good book?  Among the Fallen by N. S. Dolkart continues the strong character building, world-building, and story-telling that was begun in Silent Hall.