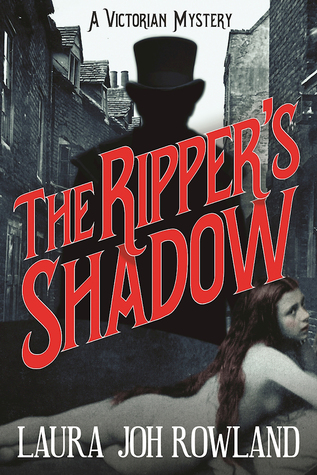 I’ve been fascinated by Jack the Ripper history, stories, and fiction since I first watched a particular Star Trek episode forty or so years ago (true geeks will know which episode I’m referring to).  Since then I’ve been pretty much a sucker for anything Ripper-related, hence my selecting an ARC of this book.

Sarah Bain is a photographer in 1888 London’s Whitechapel district … yes, the same district that the infamous Jack the Ripper preyed upon.  Yes, Sarah is nervous because, as a woman, she could easily become the Ripper’s next target (though she’s certainly not a prostitute as his victim’s seem to be).  But she’s also nervous because she has an inside scoop on the Ripper’s victims.  She’s photographed them all in some steamy Victorian boudoir photos.

Because she has a connection to the victims, she (and a strange collection of friends) decides to investigate the Ripper murders on their own.  They make a terrifying discovery as to the Ripper’s real identity, but revealing it won’t be easy and will make surviving to see another dawn even more difficult.

I really, really liked the premise here.  To see this most infamous of murders from the ‘average’ person’s point of view, and someone with a connection to the victims is really wonderful.  But a premise is not a book.

For every moment in which I appreciated the approach to the story, there were two or three moments when I slapped my forehead and wondered what the heck the author was doing.  Where to start…

First, and most obvious, I think, is the fact that the language is so incredibly modern and very, very American.  At one point a woman tells Sarah, in regards to her promiscuity and the likelihood of getting pregnant: “No, I won’t. He uses a rubber.” The term ‘rubber’ really struck me and I made a note in my Kindle to look it up later, which I did.  ‘Rubber’ is almost solely an American term for a condom, though it has become known enough for people elsewhere to at least recognize the meaning.  In England, today, the term ‘rubber’ usually means an eraser.  So…1888 England?  Rubber = condom?  I don’t think so.

We also have a very strange sexual encounter described in the book.  Sarah is a quiet, shy woman but her inner desires shine through in one moment.  This is supposed to be a budding romance, but it breaks off quite drastically and then has the potential to start again (though fortunately the book finishes before that can happen).  There was nothing really remotely sexual happening in the book and all of sudden this sex scene appears.  And because the story is told in first person, present tense, we get the details of what she’s feeling.

I have nothing against a good sex scene in a book, but can it have some meaning please?

The book also commits one of the worst sins (for me) for a mystery: the action or plot revolves around a supposition that is deemed strong enough to move on.  Here it is: “He must have seen Hugh guarding Kate and followed him.” ‘He must have’…. I tend to see this as the author not knowing any other way to have the story move from point ‘A’ to point ‘B’ … instead we’ll just make a character decide that it ‘must’ be the way and then go with it.

Author Laura Rowland had a pretty great idea for a story, but rather than research it or try to really set it in the time, simply wrote it as through it happened today, in America, but without some of the technology we have today.  That’s not historical fiction, that’s poor research and writing.

Looking for a good book?  The Ripper’s Shadow by Laura Joh Rowland is a historical mystery set in Jack the Ripper’s London, but without any of the feel for the time and place.  It is a good idea, poorly executed.