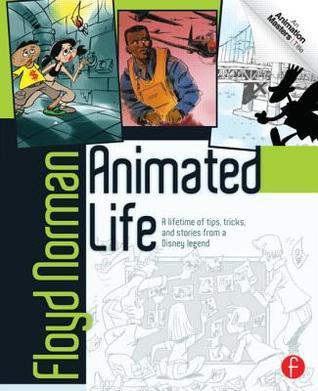 Part memoir, part how-to, animator Floyd Norman has a tale to tell.  Norman was an animator – the old school kind that used to draw things on paper!  He worked for Walt Disney during the early days and both learned a lot from the Master (Disney) and the other animators, as well as managed to teach a few things to some of the new breed of animators.

This book is not a tell-all, gossip sort of book. This is a respectful insider’s account … almost too much so.  One gets the feeling that Norman was a little bit in awe of his boss(es) at Disney. He even has a bit of a ‘Pollyanna’ attitude about his work with so many of the ‘greats’ during the early days of Walt Disney.

But that ‘Pollyanna’ attitude takes an edge when he’s first let go – One job comes to an end and there isn’t a place for him on any of the next films.  But through his connections, he’s offered the chance to draw a series of Disney newspaper comic strips. Later he starts his own production company (which is harder than he expected), and meets the wizards of Pixar developing a new kind of animation.

Norman, it should be noted, is African-American. This comes in to play in a couple of different ways.  First – there simply aren’t (or weren’t) a lot of African-Americans working in animation at any time but particularly in the 1950’s. In fact, Norman was the first African-American animator at Disney.He comments that his fellow workers can’t believe he drives as much of a distance as he does to get to work and that he should look for a place closer, but his co-workers didn’t understand how difficult it was for a black man to move into those communities.

Norman also serves in the military during the Korean conflict and on his return spends some time in the American South, where segregation is still painfully obvious.

During the Watts Riots, when Norman’s white co-workers were afraid to venture into the L.A. area, Norman picked up his movie camera (a camera he purchased from the Disney family) and headed down to get some footage.

Floyd Norman has had an incredible career and I was really glad I had the opportunity to read this book and get to know a little about him.  Anyone interested in film animation or entertainment history would find this book worth reading.

Looking for a good book? Animated Life is part memoir, part how-to from Floyd Norman, a man with a very unique perspective as the first African-American animator to work for Walt Disney.

Animated Life: A Lifetime of Tips, Tricks, and Stories from an Animation Legend