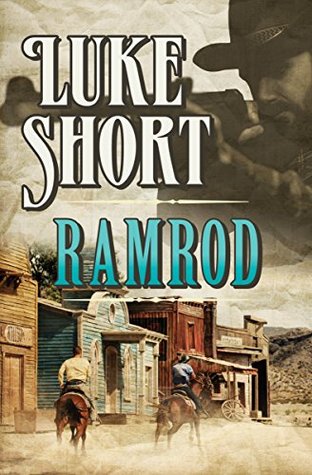 I think I am a member of a dying breed … a reader of ‘western’ fiction. There are very few new westerns being published (believe me, I’ve been looking), though there are a few, the majority of the westerns that I’ve been seeing are reprints of classic works.  Ramrod, by Luke Short, is one such reprint.

First published in 1943, Ramrod tells the story of Dave Nash the ranch foreman (a ‘ramrod’) who will do anything for his boss, Walt Shipley, because Shipley took a chance on him and gave him a job when no one else would. But what Dave doesn’t expect to have to face off against is … a woman.

Connie Dickason is a strong, seductive woman and Shipley has his mind set on marrying her. When Shipley is driven out-of-town by a range war, Dave and Connie have to fight together to save the ranch and the ramrod discovers just how strong and determined Connie can be.

This book was made into a movie of the same title, starring Joel McCrea and Veronica Lake.

I’ve only read one other Luke Short novel (which I have already reviewed).  That other book, I felt, rambled too much – it didn’t present a very straight-forward story.  This book, on the other hand, is pretty clear-cut. The story is set up very well right from the start and it drives forward without much deviation (not a lot of sub-plot here).

Unfortunately, I found it just a little bit dull.

While Dave was a character that I could see, follow, and understand right from the get-go, Connie was a bit of an enigma for me.  I didn’t understand her motivations, though I think Luke Short tried to get it across.

This is not what many people expect when they think of a ‘western’ – it’s not a big shoot-’em up.  It’s also not really a romance in the sense of ‘boy-meets-girl-tries-to-woo-girl’.  This tends to have characters who are a little more ‘real.’ They aren’t obvious good or bad characters … just regular people trying to make a go of their every-day lives.

But ‘real’ people trying to live their everyday lives can be a bit dull if you are reading about them.

Once again I can see some real strengths in Luke Short’s writing and story-telling, but this one just doesn’t strike a powerful chord with me.

Looking for a good book? Luke Short’s western tale, Ramrod, has some very real characters but the story is just a bit on the dull side.