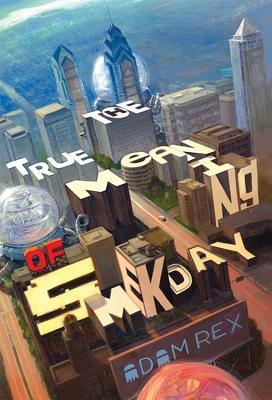 I like to borrow audio books from my local library for my commute and this book looked really interesting, though I had absolutely no idea what it was about.  This is a YA book about how one young girl survived when aliens invaded earth and shuttled all the humans to one location.

The audio book narrator, Bahni Turpin, was a struggle to listen to at the beginning – she had an unusual intonation – but by the end of the book, I had grown to actually looking forward to hearing her tell this story.

This was a rather unusual sci-fi YA story, though perhaps ‘original’ is a better term than ‘unusual.’  Aliens have invaded and sent everyone to Florida.  Our story narrator, Gratuity “Tip” Tucci, stayed behind looking for her mother who disappeared earlier than most.  Now pre-teen Tip is making her way to Florida on her own.  She encounters one of the aliens (called “Boov”) who is on the run himself and they team up to get across the country.

In good YA fashion, Tip learns a little about herself and the human race by befriending an alien.  They have quite the adventure, which is what drives the plot, and includes a second group of aliens invading and chasing off the Boov.

There were a couple of small plot points that I thought were extraneous and did not propel the story forward but seemed to be included simply for the sake of action.  But these actually slowed the story down.  Also…the ‘purpose’ of the story changed about three-quarters of the way through.  From a goal of finding her mother, the story switched gears to become one about stopping some humans from making bad decisions.  All fine ideas, but it really became like a book and a novella rolled into one.

Still, this was fun and I’d encourage anyone looking for a sci-fi type story for a young reader.

Looking for a good book?  The True Meaning of Smekday by Adam Rex is a YA sci-fi romp across the country with some powerful, but ‘simple’ aliens and a little girl.

The True Meaning of Smekday