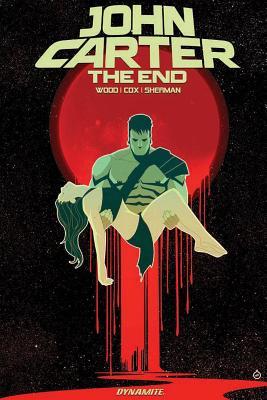 As a long-time fan of Edgar Rice Burroughs’ ‘John Carter of Mars’ series and someone who enjoys a good graphic novel, I figured this graphic novel, John Carter: The End, was right up my alley.

Mmmmm.  Not so much.

John Carter and Dejah Thoris have secluded themselves from all civilization and wish to be left alone so when an airship manages to find their location and they are informed of a genocide raging on Barsoom they are surprised that they might be Mars’ last, best hope. The reason that they are the only ones who might be able to stop this comes as a surprise to Dejah Thoris and reveals a secret kept from her by John Carter.

The story held a lot of potential and was intriguing enough to capture my interest, but was drawn out too much to fill the individual comic book series and make it enough to sell it as a graphic novel.  As it is, 15% of this brief book is taken up with ‘extras.’  There is just enough actual, appropriate story here for one full-sized comic book issue.

A major part of any graphic novel is the graphic part – the art (otherwise why not just write a novel or novella?).  The art here is … I’ll be kind … the art here is not for me.

Artist Hayden Sherman has crafted this book with a very abstract style of art – much more-so than even the cover (as depicted above) suggests.  The style is harsh.  Hard, straight lines in varying thickness dominate.  In fact I don’t think there’s a curved line anywhere in this book.  Even the images representing circles are made with a series of short, hard, straight lines.

I can accept an abstract art style if the art tells a story, but Sherman’s art actually confuses the story.  Too often we can’t tell who is talking and we can’t separate John Carter from any other male figure in the book.  Dejah is the only one we can identify because she’s the only woman in the story.

Sadly this was a real flop for me.  I give it two stars because the story was interesting, but I’d much rather read it as a narrative story rather than a graphic novel.

Looking for a good book?  Even fans of Edgar Rice Burroughs and his John Carter of Mars books aren’t likely to get much out of the graphic novel, John Carter: The End.