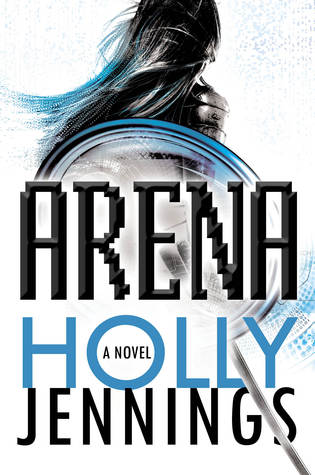 This was just a heck of a lot of fun.

Take the sport of MMA (Mixed Martial Arts) fighting and combine it with Virtual Realty gaming and a little bit of Tron, and you get Holly Jennings’ book Arena.

It is the year 2054 and Virtual gladiator-style fighting is big business.  Bigger than today’s Super Bowl or Stanley Cup.  The fighters are super star celebrities whose whereabouts and goings-on are constant tabloid news.

While it is virtual fighting, the gamers experience their own deaths nearly every week (unless they are the fortunate few who are at the top and don’t take a loss) and those deaths – usually a hacking or decapitation – are broadcast on network television.  This can take a toll on the players – imagine feeling your own death a thousand times! – who resort to drugs and alcohol to get them through.

One of the hottest teams in the RAGE League tournament series is Team Defiance – one of the few teams with female players.  That two of the women are having a lesbian affair and one (Kali Ling) is sleeping with her teammate, Nathan.  This is all big news for Virtual Gaming League  and RAGE followers!

But Defiance is knocked down in a big way by a team that has come out of nowhere, Team InvictUS.  All of Defiance is killed in record time and they are sent to the losers bracket in the RAGE Tournament. The team’s owner calls Kali in for a meeting where he explains that he making her the team captain.  Defiance never had an individual leader, but the recent loss shows that they need one.  It’s also good for the owner’s publicity to have the first ever female team leader.

Shortly after that, Defiance is met with another loss – the loss of Nathan, who dies in a drug overdose.

Defiance slowly pulls together, which is made even more difficult with the inclusion of a new teammate who seems to have trouble taking direction from a woman. But the game has now changed for Kali.  She has two goals now … to get the team back on a winning streak, and to make sure the public knows about the rampant drug problem in gaming – the problem that killed Nathan.

As I wrote at the beginning, this was just a heck of a lot of fun to read.  Author Holly Jennings really brings the reader into the action and we can easily picture the game-style fighting that’s going on.  She’s also done a really nice job of telling a story and making this about more than just virtual gaming.  The drive to keep Nathan’s memory alive and to let the world know about the problem of drug abuse in gaming feels a little bit forced, though it does make for a more complete story than just the constant fighting.

The relationship between Kali and the new team member seems pretty obvious from the very start, but Jennings works it nicely, even though we all know what’s going to happen.

Having had fun here, I do want to read the follow-up!

Looking for a good book? Arena, by Holly Jennings, is a swift-action story of virtual gaming, life, death, and the path to winning.  It is a lot of fun and highly recommended.