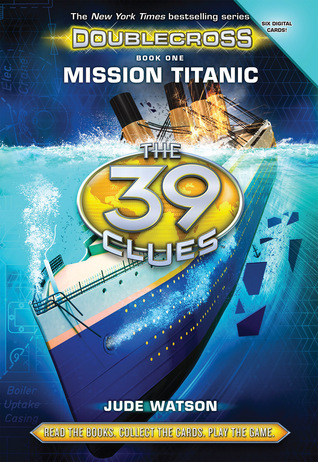 I don’t know anything about this series other than that there appear to be a lot of books in The 39 Clues series and this is a ‘Book One’ so I figured it would be a good place to start.  I realize now that I’m wrong.  This is the first book in the fourth sub-set in the 39 Clues series. And… I think you really need to read the rest of the series to really get a grip on what is happening here because the central characters all have a history that is referred to in the book.

The Cahills are the most powerful family in the world. ‘The Outcast’ was banished from the family and now he’s out for some vengeance.  He’s been planning and recruiting and he intends to recreate four (in)famous disasters unless the Cahills can figure out the clues he leaves for them and stop the disasters from occurring.  But of course it’s not quite as straight-forward as that… Ian, at seventeen, is now the head of this most powerful family, but he hasn’t yet earned the respect of Amy and Dan.  However, in order to figure out the clues and save lives and stop the disasters, they will have to work together.

I know that this is a popular series and some pretty big names in YA literature have had a hand in the series, but … oh, my … I didn’t care one bit about any of these characters and I was bored all the way through.  A result, I suspect, of my not having read the series from the beginning and so the characters were not already familiar to me.

There are youngsters out there who love this series, and that’s great.  Anything that gets kids interested in reading deserves an extra star, but I most definitely wouldn’t recommend this book to anyone who hasn’t already developed a love for the series.

Looking for a good book? Keep looking – Mission Titanic by Jude Watson relies on the reader already being interested in, and caring about the central characters before even starting the read.