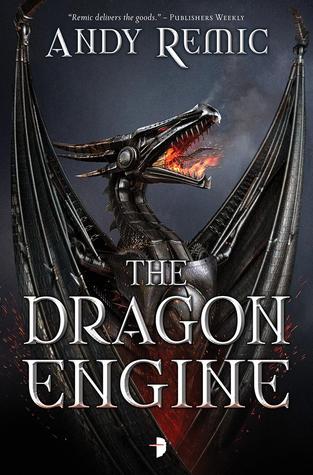 I believe that Andy Remic is the natural successor to Robert E. Howard, Michael Moorcock, Fritz Leiber and the other authors of  ‘sword and sorcery’ heroic fantasy.  But Remic may also be the successor to the Marquis de Sade.

Just when I was starting to think that I didn’t really like the epic journey fantasy stories because I’d read quite a few lately and didn’t really like any of them, comes Remic with this Lord of the Rings-like ‘buddy’ fantasy that grabbed me right off and held my interest through every page (even if I was cringing just a little bit at times).

The Dragon Engine is book one in Remic’s The Dragon Blood Empire, which gets off to a tremendous start with a group of former war heroes, friends, plan a great adventure together – to seek out the massive wealth that dwarves are reputed to have underground, including three jeweled dragon heads.

What strikes the reader immediately is the friendship among this band of warriors.  Their camaraderie feels genuine and it’s hard to say if there’s even a leader to the band as they work as a group so well.  The fighter, the most warrior of them, is Beetrax the Axe-Man and he comes across as the de facto leader, but it also often feels as though the others simply let Beetrax think he’s the leader.

We have your almost typical D&D group – aside from Beetrax the brutish fighter, we have Talon who’s an expert with the bow, Lillith a healer with an on-again-off-again relationship with Beetrax, and Dake and Jonti who have prowess with swords and daggers.

Remic sets up the characters nicely and establishes the world, which is familiar to those who have read Remic’s The Iron Wolves and/or The White Towers.  It’s the same world with the same rulers, but we’re exploring with a different band of characters.

It’s difficult to say anything without giving too much away, but suffice it to say that the book takes a very dark turn about half way through and the group’s search for treasure is put on the back-burner as they fight simply to survive, facing torture – both physical and mental – that will challenge them individually and strain their relationships.

It is powerful writing that Andy Remic has accomplished – building us up with a great cast and then making us hurt with them.  I’ve written before that I prefer books that are character driven, rather than adventure stories filled with stock characters.  Here we have an adventure story with stock characters, but the characters are well-defined and drive the story.  If we didn’t care about this band of warriors, the narrative wouldn’t have nearly the impact that it does.

The climax of the book rings true to the heroic fantasy saga but … ah … the book is left with a gigantic cliff-hanger.  Though in some strange fashion, Remic manages to make this a complete story, but opens the door to the next book, not just inviting you to read it as well, but rather thrusting the reader into the next portion of the story.

Looking for a good book?  Andy Remic’s The Dragon Engine is a powerful adventure story with characters that will become the readers’ friends.