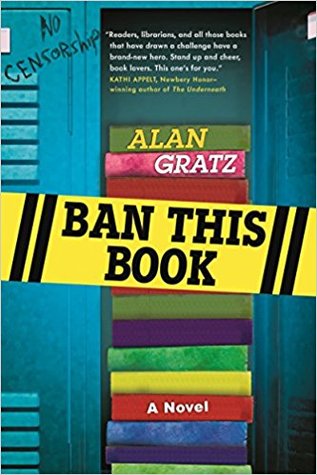 Amy Anne Ollinger is a fourth-grader who loves to read.  Her favorite book is From the Mixed-Up Files of Mrs. Basil E. Frankweiler, which she reads over and over again. But when she stops in the school library to check the book out and it’s not on the shelf she has a moment of panic, but assumes it’s been checked out by someone else.  The librarian tells her that it will not be returning to the shelf anytime soon as it has been ‘challenged’ (or essentially pulled, or banned) from the library. And thus Amy Anne begins a crusade, first to make the banned books available to her peers through a library locker system, and then an unusual means to show the school board how silly it is to ban books.

Author Alan Gratz has written a nice early reader adventure story that touches on a topic fairly important to most readers – the subject of banning books.  And along the way we get reminded not to judge people and not to blame students for the actions of their parents.

The plot is generally pretty straight forward and simple, which is ideal for the target reader, though sometimes it is so simple that it rather ignores obvious facts (major plot point … if the school already has a policy for dealing with books that someone wishes to remove from the school library, why do they completely ignore their own policy?) I also have a little trouble with the stern-ness, bordering on cruel, in which the principal is portrayed. I realize that this is intended for children and that many may actually fear their principal, but it wasn’t necessary, we already had a ‘villain,’ and a sympathetic-but-hands-tied administrator may have been more accurate and still allowed for all the action.

The book reads like a middle school novel even though it’s set a few years younger than that.

Still, the book was easy to read, moved swiftly and had a central character who was someone the reader could relate to. It was an enjoyable read.

Looking for a good book? Ban This Book by Alan Gratz is a delightful book for kids about how to fight back when adults get carried away in ‘protecting’ children from harmful literature.