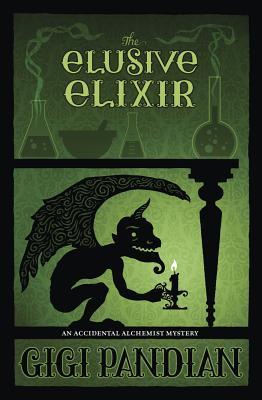 Ah…finally. The story develops, is focused and we get the read that we’ve been looking for through three volumes.

Zoe Faust is a 300 year old alchemist.  Her specialty is creating potions of healing, But all her knowledge and years of experience aren’t helping her heal her good friend Dorian.  Dorian is a living gargoyle, but he is slowly converting back to stone and Zoe is his only hope or he’ll be alive but trapped in his stone form forever.

Zoe’s been on the hunt for a cure for some time now, but she’s gotten a few leads and she believes the secret may lie in some ancient alchemical volumes – the sort you can only find in old book stores, not digitized online.

Zoe makes a trip to Paris to seek out a particular book from a secret society of ‘backward alchemists’ but while there she is approached by a very old woman who thinks she recognizes Zoe.  Though Zoe claims she often gets comments for her likeness of her grandmother, the woman isn’t convinced and attempts to get Zoe to admit that she’s found the secret of longevity.  The woman frightens Zoe, and she’s always feared that someone would recognize her. The woman threatens to sic her gendarme relative on her because there is no statute of limitations on murder and the woman is convinced that Zoe, some 60-odd years ago, once killed her assistant by burning her shop down.

The encounter rattles Zoe, but she continues her quest to save Dorian.

This book answers a lot of the unanswered questions from the previous books but I’m not sure that you need to know those questions before reading this volume.  While it might be nice to know a little more of the history of the characters, the story really doesn’t develop until this third volume.

But just as Zoe gets closer to finding the answer to helping Dorian, members of the backward alchemist coterie are closing in on Zoe, hoping to take the secret for themselves.

Meanwhile Dorian is making the most of what time he has left and is whipping up some fabulous foods.  Dorian is a superb chef, learning from a master chef who had gone blind, thus his not knowing that Dorian was made of stone.

This is a very clever mystery series, and Pandian is a talented author, but somehow this particular series hasn’t quite lived up to my hopes.  This third volume finally falls just where I’d hoped all the books would take me.  If you haven’t read the others in the series, consider reading just this volume.  If you have read the others, then you’ll want to top them off with this volume.

Looking for a good book? The Elusive Elixir is the third volume in Gigi Pandian’s Accidental Alchemist Mystery series and manages to provide a strong story and a resolution to a three-book mystery.