THE MAN OF STEEL: SUPERMAN VS THE DOOMSDAY ARMY – Laurie S. Sutton 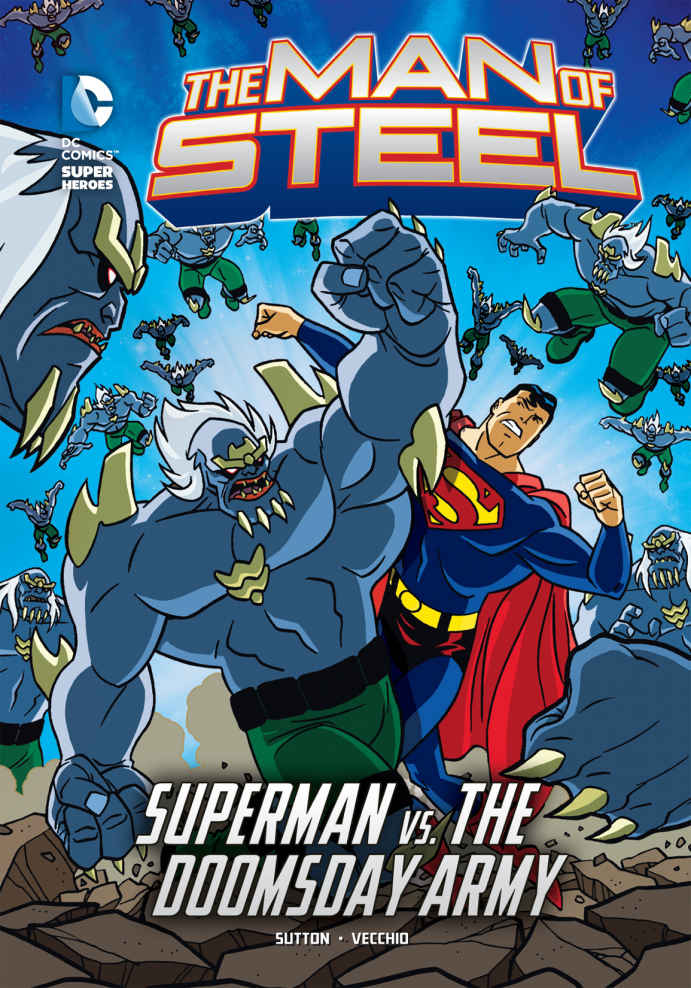 This is a surprisingly difficult book to review.

This book is aimed at a very specific target audience – youngsters who don’t typically read very much but would be attracted by the superhero subject matter.  Cartoon Network watchers who are already familiar with who Superman is.

The writing is extremely simple – Superman goes in to space to contact a spaceship that has approached Earth.  The aliens in the ship attack Superman. The aliens all look like one of Superman’s toughest foes – Doomsday.  Except these Doomsdays are easy to defeat.  Superman discovers a scientist making Doomsday replicas. The scientist has made some changes and captures Superman and will soon be making Superman replicas who will have Superman’s powers.  In order to stop the scientist, Superman will need the real Doomsday’s help.

The story moves from action sequence to action sequence in order to keep the reluctant reader turning pages.  But any real examination of the story would have the whole thing fall apart.

This is the sort of book that your child picks up at a school book fair because it has Superman in it, and you’re glad that s/he is at least interested in a book instead of a video game, but it’s not the sort of book you would intentionally select yourself because you want your child to read something with just a little more story to it.

The interior art by Luciano Vecchio is fine.  It does what it’s intended to do, which is to make a youngster pick up the book.  The style is based on the animated television series as seen on Cartoon Network with the top-heavy, barrel chests and long, skinny legs.

Looking for a good book?  Laurie S. Sutton’s Man of Steel: Superman Vs The Doomsday Army is an impulse buy at a school fair for a child already interested in Superman. What it has going for it is that it’s a book and not a video game.

The Man of Steel: Superman vs The Doomsday Army