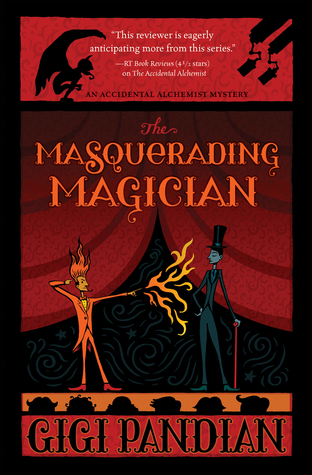 It’s been a little over a year since I read the first book in this Accidental Alchemist Mystery series, but I remember the basic premise, and after re-reading my review of that one felt moderately caught up. The Masquerading Magician is the second book in the series and here our 300-year-old Vegan alchemist, Zoe Faust, is trying desperately to save her friend Dorian Robert-Houdin.  Dorian is a gargoyle.  A living gargoyle.  But something is happening to him and he is reverting to the stone he was carved from and if Zoe can’t find a way to stop it, Dorian will be a living being trapped in stone for all eternity. A French book of alchemy might hold the answers Zoe needs, but unlocking the secrets is just a little more challenging than a Suduku puzzle.

Zoe attends a magic show, not unlike those she used to watch some 300 years earlier, and gets the feeling that these magicians are more than simple masters of illusion.  There are murders at the theatre and Zoe gets embroiled in another unexpected mystery that gets much too personal.

It’s clear that author Gigi Pandian has a solid back-story for Zoe and Dorian, and that there’s an overarching storyline, but all of that is not present in this particular volume. This has the feel of a ‘filler’ book, i.e when there is a long-running storyline but the author couldn’t think of where to take it and because of a contract, threw a story together, or when another author jumps in a writes a story with all the characters but it clearly isn’t part of the progression of the bigger story.  But this usually happens around book 8 or 9, and not the second book of a new series.

Clearly we were getting a bunch of the back story, which was nice to have, but Zoe’s search for an alchemist who can help her gets derailed behind the theatre murder and old robbery come to light.  I’d much rather be an active participant in the search for a cure for Dorian than get involved with obstacles that don’t really have anything to do with the larger mystery.

I enjoyed the first book enough to want to read this second, and I really enjoyed a mystery by Pandian in another one of her series, so I’ll risk the third book, but I’m hoping it will be clearer of focus than this one.

Looking for a good book? If you read The Accidental Alchemist, you’ll want to read this follow-up, The Masquerading Magician by Gigi Pandian just to stay current with the series, otherwise there isn’t much to recommend it.