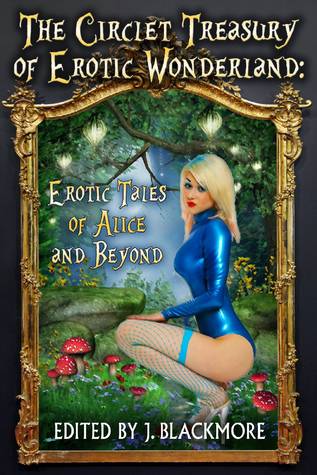 Yes, this is a bit of an odd choice for me to read.  I haven’t rated some previous erotica very well, but it wasn’t because of the subject matter, but the execution of it. Still, requesting to review erotica did feel strange. However, it was the subject matter that struck me. …The Alice in Wonderland theme to be more precise.

The theme here is that a number of different writers (all of them unknown to me) were telling stories based on the Lewis Carroll classic characters.  Some of the stories were pretty directly set in Wonderland or at least with the familiar characters, while other stories took more of an abstract look at the “down the rabbit hole” (bizarre happenings) theme.

Surprisingly, I enjoyed many of these stories.

The first story in the book, “Lily White” by Morwenna Drake best captured the sense of Carroll’s Wonderland and gave us a feel for what we would encounter if we continued on.

I also enjoyed “Tarts and Tea” by Holly Abair in which Alice has a spat with her sister which causes her to prefer Wonderland over the ‘real’ world and, being older now, she experiences some new, strange wonders that are much more adult oriented. This story felt the most like a genuine sequel (in tone, though certainly not content).

The rest of the book was generally pretty average, though nothing stood out as being truly terrible (which, I admit, really rather surprised me).

Be forewarned that the stories are generally pretty graphic, describing sex acts and using modern slang for the human anatomy.  If you want your sex-in-literature to be a little more subtle (and let’s be frank…most best-selling books have a fair amount of sex – just not quite so graphic) then this probably isn’t for you.  But if your curious about sampling some erotica with characters that are grown up versions of favorite childhood characters, then you should give this a read.