WHAT IS A SUPERHERO? – Robin S. Rosenberg & Peter Coogan, editors 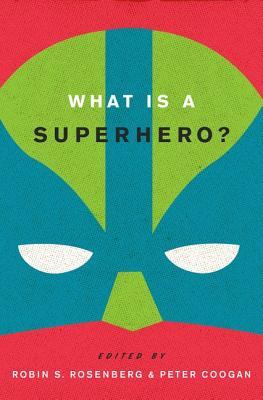 You can hardly turn around today without seeing a movie or television show featuring a superhero and they’re often on the covers of magazines and there are novelizations of their stories.  And of course there are the comic books and graphic novels from which many of them sprouted.  But what is a superhero?  Such is the general question asked and addressed in the collection of essays edited by Robin S. Rosenberg & Peter Coogan.

There is a strong collection of writers included here, musing on what makes a superhero and the social issues surrounding a society’s reasons for having superheroes.  The collection includes essays from those who might understand the genre the best – writers of superhero stories such as: Stan Lee, Dennis O’Neil, Kurt Busiek, Joe Quesada, and a few others.

I was impressed right out of the gate with Peter Coogan’s article, “The Hero Defines the Genre, the Genre Defines the Hero.”  I’d like to quote from the article but the truth is I would simply copy the eight pages and reprint it – the article was packed with thoughtful reflection and commentary.  Coogan clearly understands the modern mythology of superheroes.

I did a lot of comic book reading in the 1970’s so it’s no surprise that talent from that era has a big impact on me.  And perhaps it’s because of this that I found Denny O’Neil’s article, “Superheroes and Power,” so meaningful.  After all, who should know how to write about superheroes and their power than someone who did it so well?  His words can be applied not just to superheroes, but to any character who is worth writing about.  I really appreciated his comment:

A writer fails the genre when a story depicts superheroes who are weak or do not use their powers. What makes a character interesting (both superheroes and other types of characters) is what he does to solve problems. You give him a knotty situation and he gets out of it. Well, by definition, superheroes use extraordinary physical means.

While I’m only pointing to two articles, this is one of those rare collections in which there are no duds.  Every essay is thoughtful and well articulated.  I gained some insight and felt that I left the book smarter than when I started.  I like that feeling.

Foreword – Michael Uslan
“Introduction: What Is a Superhero?” – Robin Rosenberg & Peter Coogan
Super and Hero: Powers and Mission
Section Introduction
“The Hero Defines the Genre, the Genre Defines the Hero” – Peter Coogan
“We Could Be Heroes” – Will Brooker
“What is a Female Superhero?” – Jennifer Stuller
“Straddling a Boundary: The Superhero and the Incorporation of Difference” – Clare Pitkelthy
“Save the Day” – A. David Lewis
Context, Culture, and the Problem of Definition
Section Introduction
“Superheroes and the Modern(ist) Age” – Alex Boney
“Heroes of the Superculture” – Richard Reynolds
“Superhero by Design” – John Jennings
“The Experience of the Superhero: A Phenomenological Definition” – Dana Anderson
“What is a Superhero? No One Knows—That’s What Makes ‘em Great.” – Geoff Klock
Superheroes Need Supervillains
Section introduction
“Why Supervillains?” – Paul Levitz
“Superheroes Need Supervillains” – Frank Verano
“Superheroes Need Superior Villains” – Stanford Carpenter
“Super and Villain: A bad guy with superpowers” – Curtis Deis
“Supervillains Who Need Superheroes (Are the Luckiest Villains in the World)” – Andrew Smith
“Sorting Out Villainy: A Typology of Villains and Their Effects on Superheroes” – Robin Rosenberg
From the Experts: Comic Book Writers Define the Superhero
Section Introduction
“More Than Normal, But Believable” – Stan Lee
“Making the World a Better Place” – Jeph Loeb
“Nobility of Purpose” – Danny Fingeroth
“Superheroes and Power” – Dennis O’Neil
“The Importance of Context: Robin Hood Is Out and Buffy Is In” – Kurt Busiek
“Superheroes Are Made” – Tom DeFalco
“Extraordinary” – Joe Quesada
“The Superprotagonist” – Fred Van Lente
“Superheroes and Supervillains: An Interdependent Relationship” – Ivory Madison

Looking for a good book? The collection of essays, What Is a Superhero? edited by Robin Rosenberg and Peter Coogan is a thoughtful reflection on superheroes – who are our modern mythological figures.  The book is highly recommended.

What Is a Superhero?