THE MOON AND BEYOND – John E. Siers 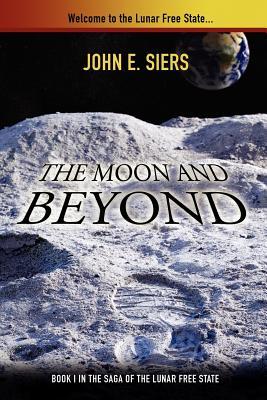 Deep Space Research Institute is a covert operation that does its business right under the noses of the authorities and officially sanctioned space programs.  The DSRI consists primarily of scientists who have developed a means of propulsion using gravity to provide thrust rather than tugging things back to the earth.  Using this concept, the DSRI builds a fleet of space craft that are capable of leaving Earth and returning without damage and begins to set up a colony on the moon.  When the United States government gets wind of the operation they try to shut it down, forcing the leaders of DSRI to make a hasty exit – to the moon.

The Lunar Free State – as the colonists declare themselves – declare their independence from the United States and any and every other country on Earth.  They look for countries that will recognize their independence and be willing to begin trade and perhaps even share ambassadors.  But as with any newly found country, hostilities run high and the price of freedom doesn’t come without sacrifice.

Right from the start, Siers had me hooked.  His research and explanation of what was happening was so spot on I checked my book three times because I thought I was reading a non-fiction account of the space race. Then, about half way through the book, Siers picks up the action and never really lets it drop.  It subsides here and there, but it’s otherwise an action-thriller to the end.

Siers must be a bit prescient… on multiple occasions he writes about politicians that seem to have come from the 2016 Presidential race.  “…we should face the fact that the truth doesn’t matter to politicians or to the media. Only perceptions matter. Victory goes to the guy who puts the best spin on the story” he writes at one point and “It’s a hoax so blatant tha most of the media dropped it after the first report” he adds later.

The characters are all pretty strong and mostly unique enough to be distinguishable from one another and the world-building is wonderful and authentic. But it’s the concept and the thrill ride that really engages the reader.  I wish I could be a member of the Lunar Free State, and I’d love to read the next book in the series!

Looking for a good book? The Moon and Beyond by John E. Siers is a thrilling sci-fi adventure sure to be loved by fans of the genre and could attract some YA readers as well.

The Moon and Beyond