IF ONLY YOU PEOPLE COULD FOLLOW DIRECTIONS – Jessica Hendry Nelson 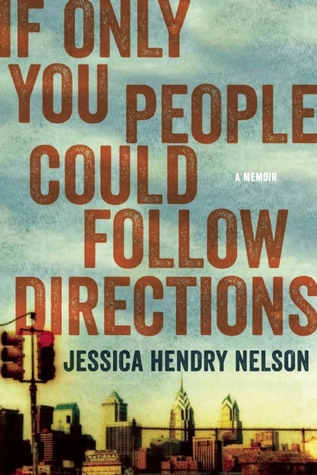 What do you write about a book that is very well written – the author conveys her message very well with compelling imagery and succinct language – but which is so depressing that I never want to read anything else by this author ever again?

Jessica Hendry Nelson has had a pretty tough life.  This collection of memoir essays, If Only You People Could Follow Directions, gives us a raw look at what Nelson has toughed out to become the person she is today.  But Nelson isn’t looking for sympathy (not that I can tell) … she’s simply being frank with the reader.

Those of us who didn’t have such a raw up-bringing understand, intellectually, that there are people like this in the world, but experiencing it through the eyes of someone who lived it definitely makes me uncomfortable.  And of course, that is perhaps the point.  Nelson is trying to get us to follow directions … to see the bigger picture.

The book opens with “A Letter to Eric” – Jessica’s brother, who will play a major role in most of the book.  The letter recalls the two of them visiting their father in one of his many addiction recovery  hospitals and then visiting him at another, and then another.  Her entire memory of her father appears to be visiting him.

Eric takes up where her father leaves off, and despite a very close relationship, it is full of struggles. She writes of some of their early times together:

I have a very early memory of choking my brother until he turned blue. He couldn’t have been more than two years old. Choking was one of my favorite methods of assault, my scrawny brother writhing as I held him on the ground, my knees pressed deep into his stomach. I wasn’t satisfied until he cried…

But despite the fighting, the two are incredibly close,in the way that only two siblings who have to face a cruel world together can be.  Drugs and alcohol are a shared vice, though Eric’s will get him into trouble not unlike his father, while Jessica appears to have hidden it well.

Nelson also writes of her sexual encounters – thirteen and a friend who was having sex with a boyfriend introduced her to someone who wanted to have sex with her. Her memory more of the concrete floor under her back and the enfolding arms afterward than the sex itself.

I was compelled by Nelson’s writing, and like a traffic accident – I didn’t want to read on, but I couldn’t help but gawk anyway.

Looking for a good book? If Only You People Could Follow Directions is a collection of memoir essays by Jessica Hendry Nelson that recalls a sad family life.