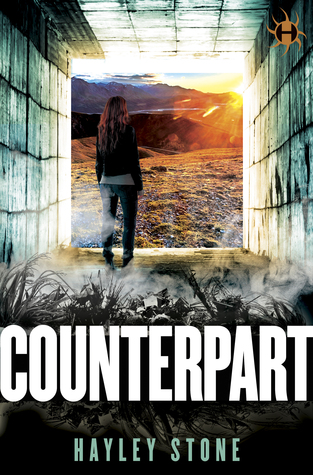 Counterpart is the sequel to Machinations by author Hayley Stone.  You can (and should), read my review of Machinations here as I layout the requirements for a classic YA story.

Counterpart continues the story of Rhona Long – the young commander in a battle against the machines.  Rhona is still battling the perceptions of those around her because Rhona was killed during a skirmish and Rhona … the current Rhona … is a clone of the original (the original being the one who had been killed).  She has slowly gained the trust of those around her, including her boyfriend Camus, and she begins to fortify their location (Alaska) to prevent an attack from the uprising machines and to hopefully build relations with other communities and countries to ultimately defeat the machines.

But when the machines get inside the fortified base and video shows that Rhona is the one responsible, she has to redouble her efforts to prove herself, gain the trust of those around her, and stop the machines.

While I wasn’t as excited by the YA aspects of the first book, the setting and characters really caught my interest and held my attention.  In this book, the YA aspect lightens up a little (she doesn’t spend as much time mooning over the boy in this volume) the story of the machine uprising was no longer new and since most of the action here takes place underground in a ‘secure’ fortress, we don’t get a very good sense of the intelligence of the machines and the path of dominance that they are seeking. Instead this is a book full of Rhona on a “should-I-or-should’t-I” and “trust-me-it’s-not-me” sequences.  And let’s face it … it’s hard to sustain such a limited focus.

There’s also no surprise in the video showing Rhona supporting the ‘wrong’ side.  We already know who this Rhona is and the average reader can easily make the leap to guessing why there’s video of her on the other side.  I was hoping there’d be some surprise to it that I wasn’t expecting, but was disappointed.

This was an easy read.  Hayley Stone moves her fiction along smoothly but in this case, the story itself needed a little more depth to keep me interested.

Looking for a good book?  Counterpart by Hayley Stone is a YA dystopian fantasy that offers no surprises to anyone who read the first novel, Machinations.