ONCE A GYPSY – Danica Winters 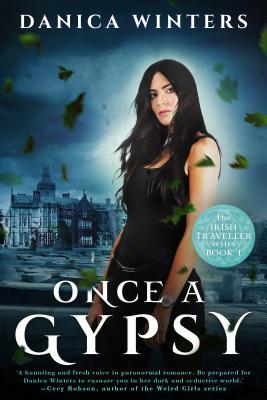 I know that paranormal romances are a hot item in the book market these days and so, in the tradition of opening myself up to new material, I thought I’d try something billed as a paranormal romance.  And being married into an Irish family this series title – Irish Traveller – seemed just as good a place to start as any.

But I was greatly disappointed with this book.

What does it take to be considered ‘paranormal’?  Not much, apparently.  There is a moment or two early on which had me ready for something, but then as I got deeper into the book I thought maybe I had imagined things.  But then it cropped up again, ever so slightly, and it continued to crop up, just enough to be considered a paranormal story, but certainly this comes across as a means to be considered paranormal but it feels tagged on rather than an integral part of the story.

I admit that I haven’t read much in the way of romance before this, but I found nothing ‘romantic’ here.  There is some longing and some characters talk about wanting one another, but none of it ever feels authentic.  I didn’t believe anyone and I didn’t care what happened to anyone.

Mostly this was some nicely done research and a lot of annoying Irish brogue dialog.

I’m not the usual target audience for a paranormal romance … I get that.  But I’m willing to be open to finding a good book in any genre, and this just didn’t work.  I’ll try again with another author.

Looking for a good book?  Once a Gypsy is billed as a paranormal romance by Danica Winters, but I found nothing romantic about it and it’s barely paranormal.