THE BIG BOOK OF JACK THE RIPPER – Otto Penzler, editor 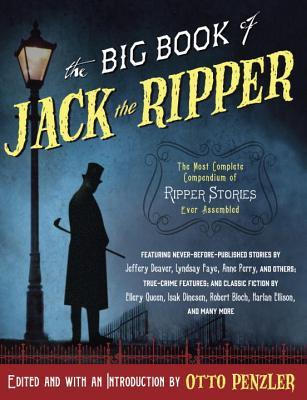 Why do we have such a fascination with Jack the Ripper? I’ve been enthralled by the murderer since reading what I know understand to be one of the many, many books suggesting the identity of the mysterious killer.  But when I told my wife about some of the things I was reading in this, she asked me why Jack the Ripper was so infamous.  Was it the number of people he killed?  Other serial killers have killed more.  The gruesome manner in which he did it?  Jeffrey Dahmer … need I say more? The way he taunted authorities with his letters? The fact that he was never positively identified? I suggest it was because of all of these things, along with the fact that media was just beginning to publicize these things in a way that had a far-reaching effect. But whatever the reason is – and it’s probably different for everyone – Jack the Ripper is a popular figure in historical mysteries, thrillers, and nightmares.

Editor Otto Penzler has put together a tremendous volume of essays and fiction featuring this most infamous of killers.  At over 800 pages long, the book is no light read and will likely take even the hardiest of readers a significant amount of time to get through this book.

The book begins with a series of articles and essays.  Non-fiction writing about the murders.  This is about one-fifth of the book and in many ways was more interesting than the fiction pieces.  We often think we know the ‘facts’ of the case; some might be able to name the victims. But as with most crimes, there’s much more behind what might get reported. “Mystery Solved” was one of the best pieces in the book.

The fiction section boasts an incredible range of stories, from Marie Belloc Lowndes short story “The Lodger” to her novel of the same title, expanding on the short story, to works by Robert Bloch, Harlan Ellison, Ramsey Campbell, and a host of others. Some I found quite compelling, and others not so much. But with a book of this size, with this many works included, that’s to be expected. While most of the works here are collected from other sources and have been in print before some, such as Anne Perry’s “Jack” and ‘Jack Be Nimble, Jack be Quick’ by Stephen Hunter, were written for this book.

Clearly, you need to be prepared to read articles and stories (and novels) about one of the most infamous murders in human history when you tackle this book, but if you have any interest in the subject matter at all, this is a collection you won’t want to miss.

“Yours Truly, Jack the Ripper” – Robert Bloch
“A Toy for Juliette” – Robert Bloch
“The Prowler in the City at the Edge of the World” – Harlan Ellison
“Gentleman of the Shade” – Harry Turtledove
“The Adventure of the Grinder’s Whistle” – Howard Waldrop
“Sagittarius” – Ray Russell
“The Demon Spell” – Hume Nisbet
“My Shadow is the Fog” – Charles L. Grant
“By Flower and Dean Street” – Patrice Chaplin
“The Final Stone” – William F. Nolan
“The Gatecrasher” – R. Chetwynd-Hayes
“A Punishment to Fit the Crimes” – Richard A. Gordon
“From Hell Again” – Gregory Frost
“An Awareness of Angels” – Karl Edward Wagner
“A Most Unusual Murder” – Robert Bloch
“Jack the Ripper in Hell” – Stephen Hunter
Permissions Acknowledgments

Looking for a good book? True crime lovers, historical fiction lovers, fans of mysteries, and anyone with even a passing interest in the legendary ‘Jack the Ripper’ will want to read The Big Book of Jack the Ripper edited by Otto Penzler.

The Big Book of Jack the Ripper