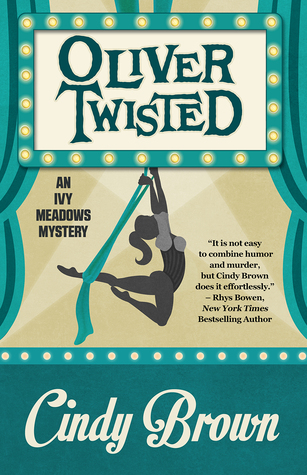 This is my third Ivy Meadows Mystery (and third in the series) and I find these books to be just plain fun.

Ivy Meadows is an amateur actor and an amateur detective, working for her Uncle Bob’s private investigations firm (Duda Detective Agency). This time the agency has a special client … a cruise ship line. There have been a rash of thefts aboard a series of cruises that are dedicated to a literature theme. Bob goes aboard as a wealthy rancher and Ivy goes undercover in the role of ‘Nancy’ in an unusual version of Dickens’ “Oliver Twist.” But things get off to a horrible start when Ivy discovers her ship-board roommate dead and stuffed in a closet.

The list of potential suspects grows rapidly and the apparent gold-digger who’s attached herself to Bob, and who is clearly hiding something, has Ivy worried. But she should be more concerned for her own safety, given the constant mishaps following her.

I love the concept for this series and author Cindy Brown really tells a delightful tale.  There’s some anxiety and excitement in the mystery, but there’s more than a fair amount of humor, usually surrounding Ivy’s stage time. Here she has to perform as an aerial artist in flowing silks which might be tough enough.  Now complicate that with the fact that she’s on a cruise ship and suffers from a fear of the open water!

The theft and murder investigation is nicely complicated for this typically light read, but just as with the other two books, it is Cindy Brown’s characters that really shine.  Everyone we meet seems like a real person with their quirks and foibles emphasized.  We chuckle at what they get in to, we don’t really fear the ‘bad guys’ too much, and we have a generally good time. And what more can you ask of a book?

You don’t need to read books one and two to get a feel for the characters, but you will probably want to just because it’s a good time.

Looking for a good book? Cindy Brown’s Oliver Twisted is a fun, funny mystery that will leave you asking for “more” at the end.