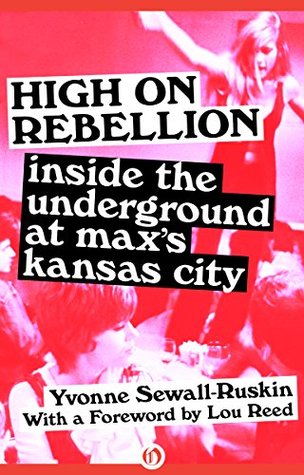 This may be one of my shorter reviews as, really, there isn’t much to review in this book.  This isn’t so much a book about Max’s Kansas City bar in New York, as it is a series of mini-memoirs/reminiscences by some of the former patrons and workers at the club.

I had not heard of Max’s before this book … I thought the idea of reading about a popular club during the 60’s and 70’s would lend some insight into the culture of the day.  It does, I suppose, but not in the best of light.  There are moments, quite scattered, that are like little nuggets of interest, but there aren’t enough of them.

Max’s was a popular hang out for artists of all kinds.  The man behind Max’s, owner Mickey Ruskin, appears to have been a generous, mostly tolerant man who allowed many starving young artists to get on their feet and served dinner and drinks at Max’s.  As Larry Zox writes:

It was the beginning of all our careers at that time, from Stella for abstract painting to Lichtenstein or Warhol in the Pop world. We were all there. Someone would come over to your studio and you’d hook up and go over to Max’s and have a late lunch, and you’d make deals.

But this is the 1960s/70s.  It’s not just an era of peace and love, but an era of outrageous sex and drugs. And drugs.  And more drugs.  Were there drugs at Max’s?  Derek Callender writes: “There were enough drugs in that back room to cause genetic defects. That was pill city.”  Night Manager Ritty Dodge said, “One good thing about working the back room is when the lights came up, you could pick up enough pills to last you the week.”

And if it wasn’t drugs, then it was sex.  Rampant, flaunting sex or naked cavorting among the other guests.

Most of the memories/memoirs included in the book talk either about the drugs, the sex, or all the famous people who came in and did drugs or had sex in Max’s.  When one person writes

It was sort of common knowledge that Jackson Browne couldn’t stand the heat in the back room, and that was why he moved back to California. … He was really not equipped to handle that scene.  He had to go to California where it was easier to deal with life.

it actually makes me think more highly of Jackson Browne. (The comment was made by a former bartender at Max’s … someone whose name means nothing to this reader.)

And it wasn’t just the patrons at Max’s who were out of control.

We had to deal with not only impatient customers, but Izzy, Max’s insane cook, who was constantly grabbing at your boobs and freely swinging the butcher knife. He was actually hired by Mickey out of jail on a murder rap. But, as Mickey always reminded us, “good cooks were hard to come by and waitresses were not.”

I was pre-teen in the 1960’s, but the era has fascinated me and I usually really enjoy reading about the artists and their lives during this turbulent (“rebellious”?) time.  But this book really was nothing more than memories of hedonism and illegal pharmaceutical use with a whole lot of name-dropping to boot.  There’s nothing really to get here, other than that a bunch of famous, some not so famous, and many not at all famous people had a ton of (illegal?) fun at Max’s.

Looking for a good book?  High on Rebellion is a series of reminiscences about the sex and drug culture at Max’s Kansas City bar in New York during the 1960’s, by Yvonne Sewall-Ruskin, a former waitress and wife to the owner.

High on Rebellion: Inside the Underground at Max’s Kansas City