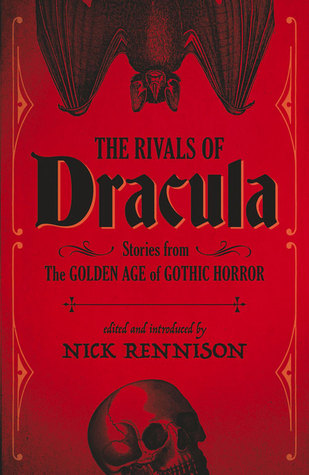 I’ve long known that Bram Stoker’s Dracula was not the only vampire story of its day … simply the best known.  But until now, I had never read any of the other, contemporary works.  But vampires, and other supernatural spirits were popular grist for the turn of the century writer.  As editor Nick Rennison points out in his introduction:

…writers … made their livings by producing stories for the vast number of weekly and monthly magazines that proliferated in the period. They were not literary stylists and they were often obliged to pour out fiction at such a rate that quantity became as important as quality but they aimed always to write exciting and readable narratives and they mostly succeeded. What can be termed ‘weird’ fiction was a very important part of the entertainment served up by the story magazines and the vampires took their places alongside the ghosts, ghouls and supernatural creatures of all kinds which populated their pages.

This well-collected and edited book gives the reader a taste of turn-of-the-century dark fantasy fiction and it’s really interesting.  None of the stories stands out, head and shoulders above the classic Dracula, but there are some gems and it’s well worth exploring.  One of the highlights for me was “Ken’s Mystery” by Julian Hawthorne, particularly because I read and reviewed a biography of Mr. Hawthorne (see that review here) but had not read any of his works.  This is a typical example of a freelance writer producing ‘hack’ fiction in order to make a buck or two.

In some cases the idea of a ‘vampire’ is stretched a bit.  As Rennison points out in his introduction to Marsh’s “The Mask”: “Its villainess isn’t a vampire in the undead sense but she certainly as a taste for blood.”

This is clearly a work of love on Rennison’s part and it’s clear that he really appreciates these works, and that does make this more enjoyable.  While I can’t say that I will be talking or writing about how great these other vampire stories are, I do really appreciate them and how they had an effect on Dracula (or vice versa), and in some cases (such as with HB Marriott Watson) I am very interested in reading other work by the author.

Looking for a good book? The Rivals of Dracula, edited by Nick Rennison, is a nice compendium of contemporary (to Dracula) vampire stories.  It is worth reading if you are a fan of the vampire motif or turn-of-the-century fiction.

The Rivals of Dracula